All we ever talk about 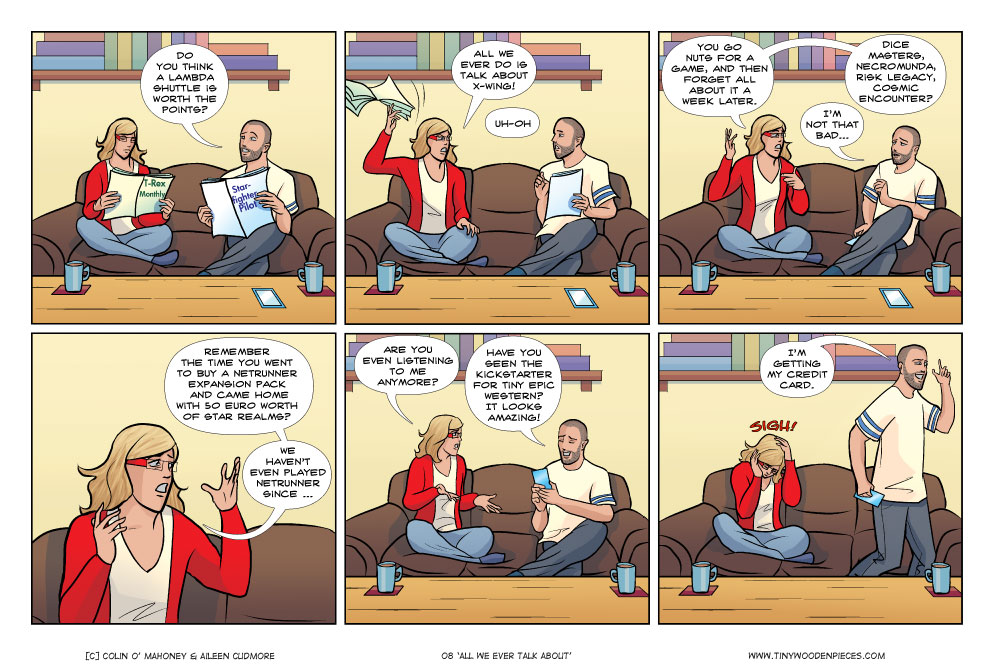 I always worry a lot about comics that depict Aileen as any kind of bad guy, or nag. Writing is easiest when it’s from my own perspective, and I don’t mind making myself the joke of a strip. This does mean that quite often Aileen gets written in as the ‘straight man’ in the sketch. I consciously try and mix it up whenever I can, but it’s a (semi) biographical strip that draws a lot of humour from our own lives and hobby, so writing it from my own point of view is more natural, and feels more honest. Also I don’t have to feel bad about making anyone else the butt of the joke.

As I said, I try and mix it up, but I also try very hard not to second-guess myself, or to write what I think an audience will want, or avoid what an audience might take issue with. There’s no honesty in that, and it will only serve to dilute what I want to do. I guess what I’m saying is that as well as being my favourite comic collaborator, Aileen is my favourite person as well, and if she comes off as anything less than that in my writing it’s because I’m making myself the punchline of the comic.

I am currently obsessed with X-Wing, and the line ‘All we ever do is talk about X-Wing’ line came from a friend that stayed with us for the weekend. He was imagining Aileen snapping and letting her true feelings come out. Hilarious as this was, the reality is that we are both down pretty deep down the X-Wing rabbit hole right now. Any time that was previously spent on Facebook or Twitter on our phones is now used for tinkering with squad lists on the brilliant X-Wing Squad Builder App (really an essential tool if you play, even casually).

Tiny Epic Western, like the previous games in the ‘Tiny Epic’ series immediately hijacked my attention. Ultimately though, the international shipping makes it a definite no go. The 12 dollar rate turns a great value, pocket-sized 18 dollar game into a 40 dollar game. Which sucks for us.

The magazine I am reading- Starfighter Pilot -does not exist, and I think if I were to list everything that is wrong with the world right now, that would make the top ten.

Also, long time readers might have recognised the reference to a previous comic. Well done if you did, your no-prize is in the post.