…And Then We Held Hands 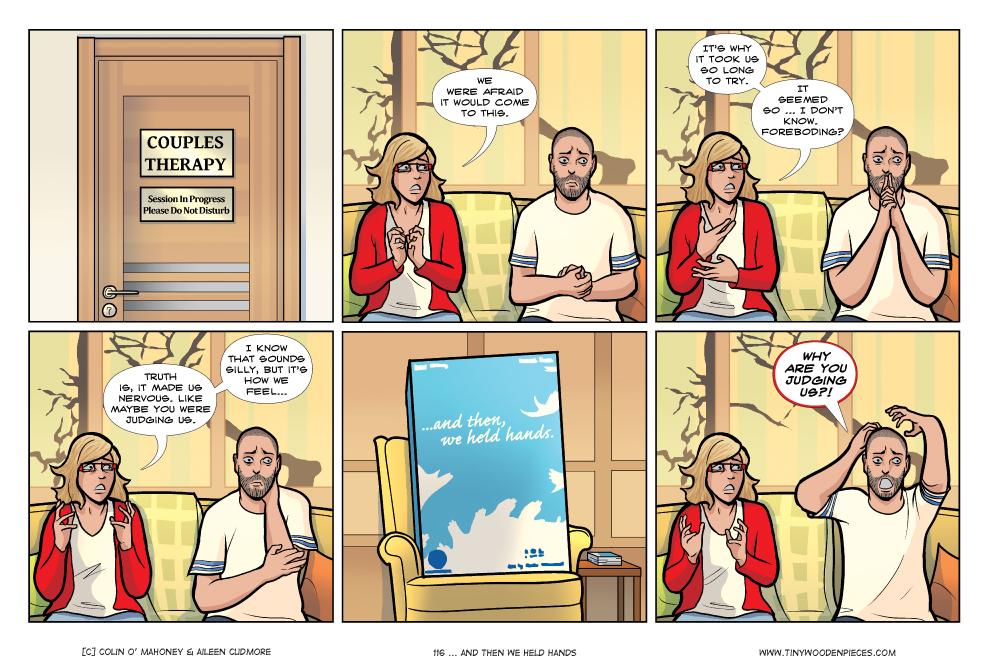 …and then we held hands

“…and then we held hands is a non-verbal cooperative game about two people and their failing relationship. The two players must cooperative in order to achieve emotional balance within and between them. The players’ perspectives change as they dance around each other, trying to fix what is broken”

“They must cooperate by “reading” each other’s intentions and by trying to help each other avoid being stuck, which would cause the game to be lost.”

Intimidating, right? I mean, I’m not kidding. This sat unplayed on our shelf for months, not because of the usual reasons games go unplayed, but because we were afraid of the damned thing. What if it judged us and found our relationship lacking? What would we do? Would we have to break up?

The game comes in such an unassuming little blue box, I don’t know how they managed to make it feel so disquieting. It’s like an emotional TARDIS.

As it turns out, it is not at all weighty to play. Although it’s wrapped in a heavy theme, playing it feels more like a light, refreshing breeze. You basically have to move around a board by discarding ‘emotion’ cards to move to their matching nodes. You have to reach a series of goals, and then meet in the centre. The cards you use to move can belong to you, or your fellow player, but if you don’t carefully assess their own board position as well as your own, the cards you take could result in your partner being unable to move, thus losing the game (for both players).

It is ‘non-verbal’ in that you are not allowed to discuss the game while playing it. No hints, no tips, no strategizing. Instead, it is up to you to look out for your fellow player at all times, and think ahead with them in mind.

While the game allows, and even encourages discussion of other topics while playing, I find I love the silent consideration and peaceful play that it can bring to the table. Topping this is the satisfaction it brings when you are playing in sync with someone else. When you know they have seen the move you have seen, and have avoided the traps you so badly wanted to point out to them. When you know you are working in the same way, towards the same goal, without the need to communicate, it’s a unique experience.

The game is not complex, but does have varying degrees of difficulty. While we have yet to explore the higher difficulties, the calming, bonding play experience that it delivers in the standard mode is enough to make me very glad we conquered our fear of its Sauron-like Eye of Judgement, and discovered the strength it can make us feel.

The game is a flagship for the diversity, brilliance, innovation, and beauty of modern board games. While we have yet to explore its longevity and replayability, I do still recommend tracking this down.

It’s also very pretty. Check it out on BGG:

Tags: abstract, card games, co-operative, emotions
4 Comments on …And Then We Held Hands