Games night – A night to remember 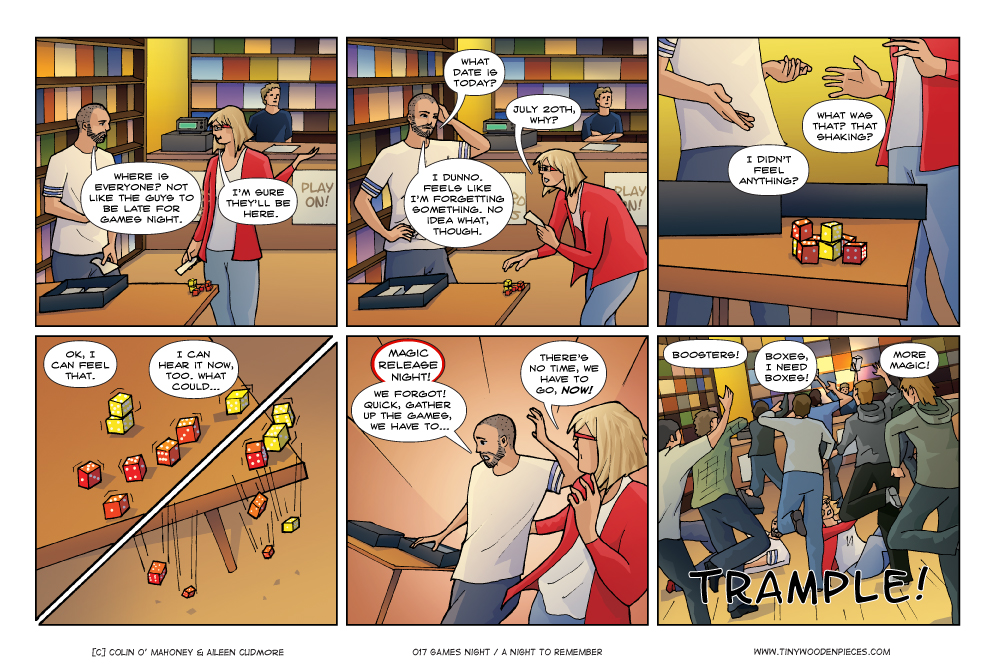 Please don’t get the wrong impression from the comic. I don’t begrudge Magic its popularity. I think it’s amazing. A phenomenon like that can only be good for hobby games of any sort, whether they are board, card, or war. It raises the profile, brings in profits, brings in players.

According to Wizards of the Coast, Magic has more than six million players. That is literally more people than the country I live in. Yes, Ireland is a small country, but that is still a ludicrous number of players, and a huge income for hobby stores. What helps gaming stores, helps everyone involved in the hobby. Not just that, though. I feel Magic: The Gathering is actually an important game, and not just for the bottom line of my local game stores.

Board gamers are fond of talking about ‘gateway games’. Games that are ideal to introduce someone to the hobby with; to show them that there’s more going on than Monopoly or Game of Life. We talk about the idea a lot at home in Tiny Wooden Towers as well. Promoting the hobby, and teaching games is important to us. But for all people talk about that ubiquitous island of Catan, Ticket to Ride and King of Tokyo, the fact is that more people get into gaming through Magic than any of these games – maybe even combined.

Magic is a real ‘hobby’ sort of game. You don’t just play it, you collect it. You trade it, discuss it, talk about it, endlessly strategize and deck build. There is more organised Magic play than any other game that I am aware of. It’s something a young person can become a part of, can genuinely find community in. For me, that makes M:TG more than just a game, more important than just something you might play to pass time with friends.

And whether they stay with Magic, sticking to those five-coloured cards for as long as they play games, or they move on to other sides of the hobby, we should all be grateful for what Magic has done, and keeps doing for our hobby. Even if the idea of a game with no limit on spending, and such a competitive side, offends your very nature, ask yourself how many people you game with got to your table by the grace of Richard Garfield (Magic’s designer). Or even better, keep an eye out at your local game store for someone getting into Magic. Not an experienced player, splitting boxes and buying singles. But a young kid, coming in with their friends, or even parents. A kid who saves up money for a booster or two every weekend, for those precious few cards he or she can slot into their ever-growing deck to do something new, something interesting, something they’ve never seen before. A kid so new to the game that they might for the first time be looking at cards that don’t have hearts, jokers or baseball players on them.

I’ve been there myself, at an age when competitive play didn’t yet even exist, when the notion would have sounded ridiculous. It’s not cards in that pack you’re buying, it’s a new world, something you can’t wait to share with your friends. Something that seems made for you, unlike so much else in the world around you, the one that it sometimes feels you don’t fit into.

For a kid like that, as it was for me, it’s not cards you’re getting in that booster. It’s magic.