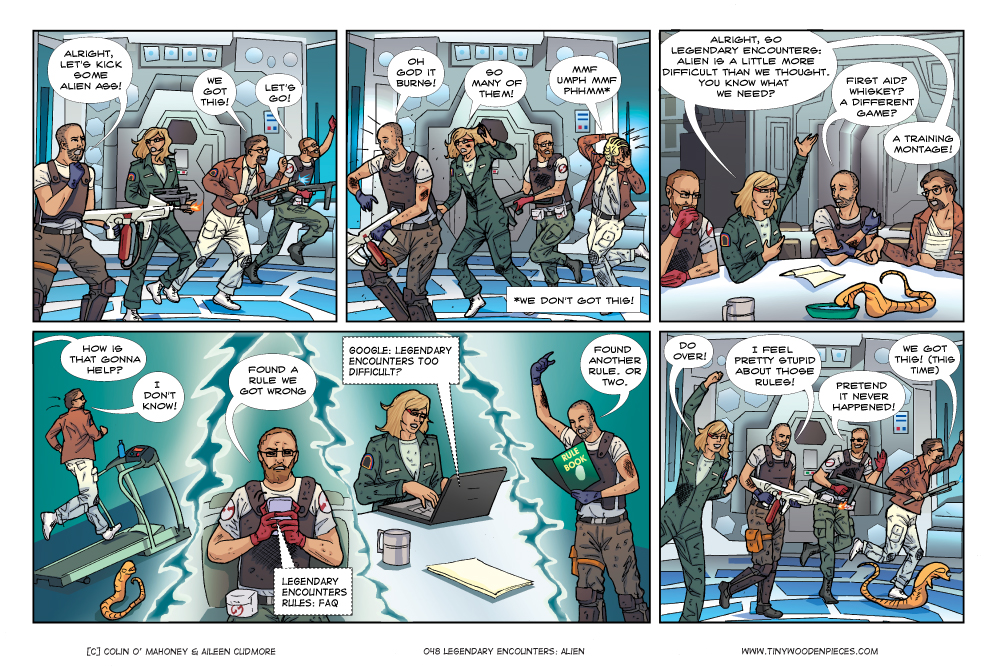 Legendary Encounter with an alien

This week’s comic is laid down exactly as it happened. No concessions were made to the story in order to facilitate a better punchline. By which I mean, I couldn’t think of a better punchline, so decided to make as close to life as possible instead. That’s something, right? Dialogue has been attributed correctly, and evidence of our defeat at the hands of Legendary: Encounters has not been exaggerated. Not in the slightest.  That game is hard.

Where we got caught out in Alien was not in new mechanics that we didn’t understand, but in mechanics we had seen before in previous games. These mechanics played a little differently in Alien, but our familiarity meant we presumed we knew how they worked, thus mentally glossing over some fine differences. It’s that mental thing where you see what you are expecting to see, instead of seeing what is actually there. Like seeing an abandoned ventilation shaft and crawling in only to realise too late that you’re crawling towards a facehugger, I guess.

In any case, it was after two weeks in a row of the game spitting acid all over our hapless faces that we figured out what we were doing wrong, and managed to beat it. And then moved from the Alien scenario onto the Aliens scenario, which beat us. Rules mishap or no rules mishap, it’s a difficult game. It’s good, though. I’m enjoying it a lot.

It’s a co-op deck builder. I love deck builders and I love co-op games. The level of deck building involved can feel frustratingly restrictive, though. There aren’t that many options for deck customisation, and almost none for killing off poor starter cards in favour of later, stronger cards. Actual cooperation with the other players is completely essential to winning, though, which is a strong point. Co-op where there is little to no interaction between players is a bug bear of mine. Everyone playing against the game is no fun if everyone can essentially play solo. The real fun of a good co-op game is players figuring out strategies together, and figuring out how individual turns/characters/cards can complement each other and help victory. For me, that is the draw of a game like Pandemic over a game like Arkham Horror. If the players don’t work together in Pandemic, there is almost no chance of victory. But in Arkham Horror, there are few things the players can do to interact. Obviously Arkham has an appeal of its own, but strong co-op elements are not part of it.

I guess in the interest of total disclosure I should mention that there is one inaccuracy in the comic. Wayne did not survive the facehugger. After a brief, but emotional, period of attachment, he birthed its cursed offspring, and the pain of the whole cycle of love, recreation and departure was so much that it killed him. That and a hole in his chest.