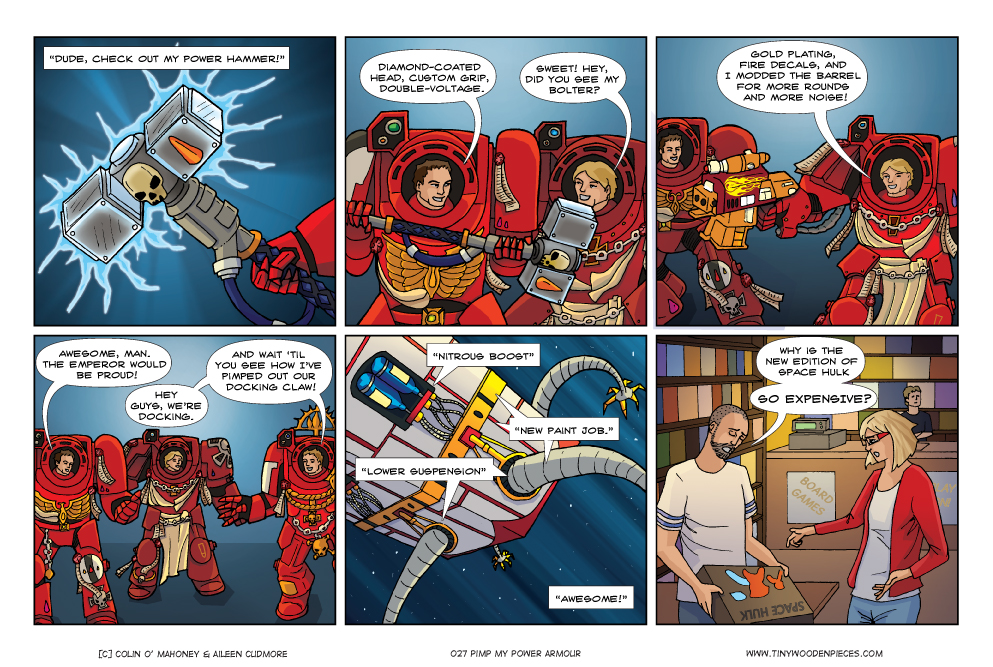 The characterisation of Terminators as the meathead jocks of the 40K Universe is one that just … works for me. I had a lot of fun writing this, imagining them as though they were teenage boys talking about car mods. Once the idea settled in, it was quite easy to imagine Imperial troops at their barracks, all keeping their heads down, hoping that the lumbering, ‘roided out Marine walking across the parade ground wouldn’t catch their eye and bend their ear about how much he can bench, and what his Ork kill count was in his last battle. The idea of Terminators as dude ‘bros is, I think, that we will re-visit when the opportunity arises.

As for the game itself, I still went to the game store. Just to look. To hold the mighty box and feel it’s heft (approximately the size and weight of an actual power hammer, if you’re wondering). I can’t say I wasn’t tempted. A few days later I went back and it was gone, vanished into the mysterious mists surrounding the nature of a limited edition, one-off release that still manages to reappear every few years. On seeing it was sold out, my feelings were mixed. I wanted it the last time it was released, I wanted it this time, but not even that five year distillation period of want was enough to justify the price tag to myself.

The argument for this €100 price tag, as I understand it, is the fact that the game contains so many highly detailed, and high quality miniatures. 12 Terminators and 23 Genestealers, in total. Going by the pricing on Games Workshop’s own website, buying just 26 of these miniatures (10 Terminators and 16 Genestealers) would cost you €133.50. Which makes buying Space Hulk great value.

Of course, this formula only works if you believe these 26 miniatures to have a combined worth (as opposed to value) of €133.50. (I do not, if again you’re wondering). What I do think of this price positioning, is that it is in no small way connected to the failing fortunes of Games Workshop.

It will bother me for a while, maybe even the next five years, but there’s no question I made the right call with Space Hulk. There are a lot of games coming soon that are essential purchases for me (X-Com, Imperial Assault, Star Realms when I can finally get my hands on it, Pandemic: The Cure.) If I am to have any hope of tackling this list, my wallet needs to be fully rested, and my bank account fighting fit, and not recovering from a full frontal Terminator assault.