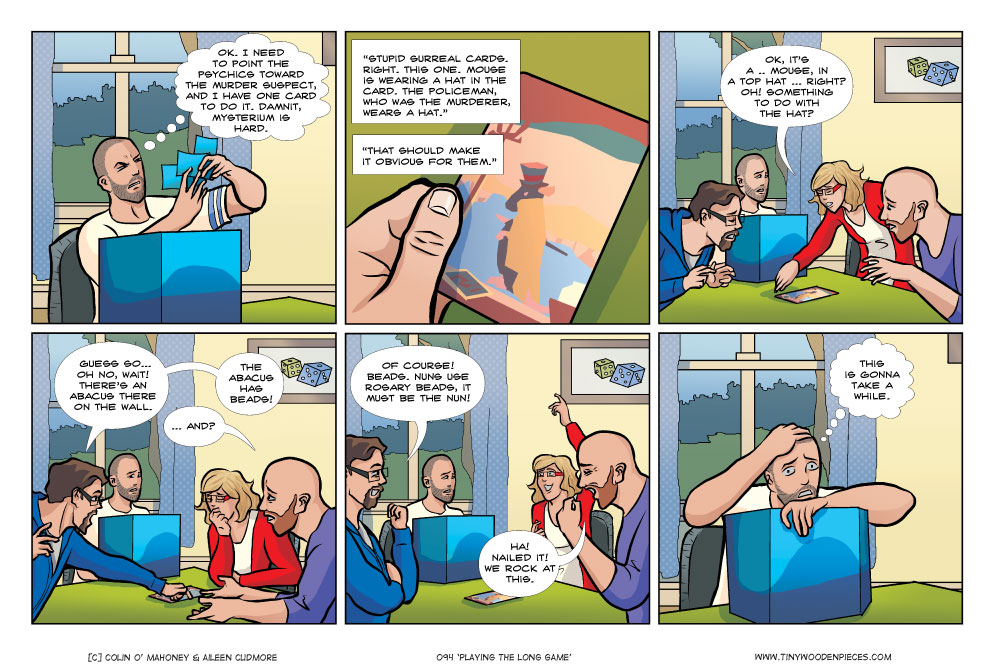 It’s hilarious, clever, and with some of the best art design and artwork I have ever seen in a game. A lot of love and detail went into crafting the spooky theme of this game, which is reinforced with every token, card and piece of scenery. It’s a fun theme with a great mechanic at its core. It’s co-operative, albeit in a very strange manner. Looking forward to trying this again on the other side of the ghost screen. And if you’re wondering exactly ‘how’ surreal the cards are, mouse in a top hat with abacus is not made up. It’s lifted directly from the game. I mean, we couldn’t have made up more bizarre examples if we tried. Playing as the ghost, it was very funny seeing what odd interpretations the other players managed to wrangle from cards I chose for really, really simple reasons that I thought were obvious.

One exciting piece of news this week is that we are going to be guests on the Podcast of @boardroomcast – it’s a fun podcast about, wait for it, board games! Which I guess is why they invited us on? It’s happening Wednesday at 8PM (tea and crumpet time, i.e. GMT) so you should check that out. They live cast via @zcastapp which uses twitter to allow listeners to live chat while they listen. It seems to be a great way to broadcast. Anyway, if you’ve ever read Tiny Wooden Pieces and all you could think was “yeah that comic is good and all but what do they sound like” then that’s kind of odd, but now you can find out. So give @boardroomcast a follow and they’ll be tweeting reminders about the show.

We look forward to chatting to you while we talk about board games live on the internet!

Oh, 21st century, you’re everything I hoped you would be and more.