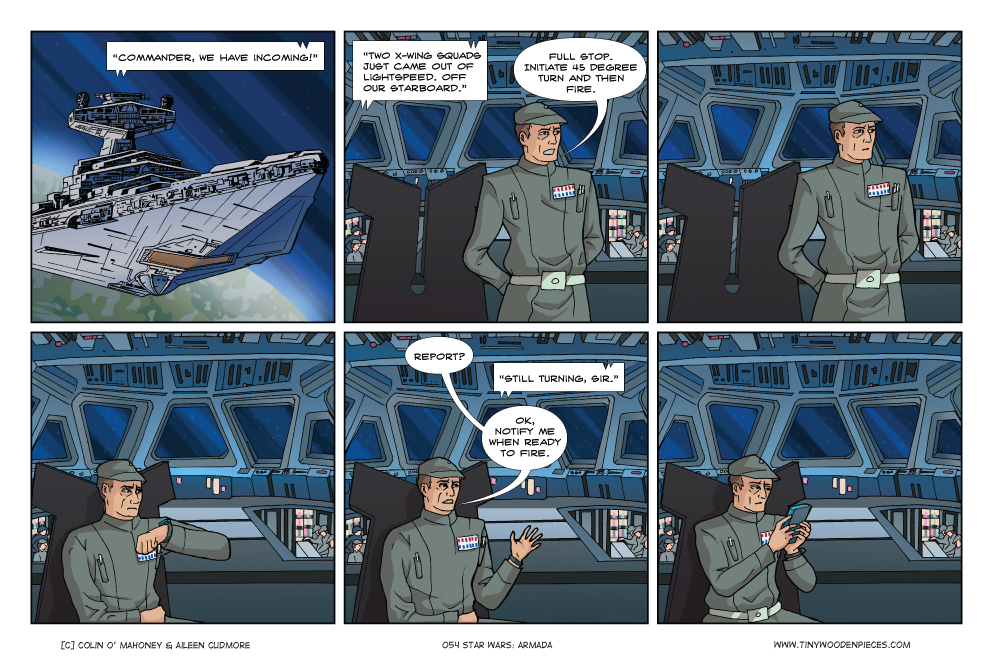 Manoeuvring slowly back around to Armada, though, it is certainly a game I want to play. Space combat in the Star Wars cinematic universe was always very focused on the smaller classes of ships. It was always swarms of TIEs Vs X-Wings, Y-Wings and whatever else the rebels found in their Alphabet Soup that morning. It made for fast-paced, exciting action. But the most impressive ships were always the Imperial Capital ships. It’s in the opening shot of the first film, our literal very first glimpse at Star Wars was the Tantive IV being fired upon, and then the seemingly never-ending mass of the gigantic Imperial Capital Ship crawls past the camera. Completely engulfing the rebel ship, and permanently burning its image into the mind of every kid who has ever sat in front of the film. The TIEs and X-Wings might have had all the best combat, but they will never match the impression the Star Destroyers made.

A game being fought on that scale demands a greater level of forward thinking and strategy than X-Wing does, and that hits a sweet spot for me. Catching your opponent in the inescapable grip of a carefully thought out plan that has taken several turns to come together is as satisfying as a record-breaking Kessel run. The turns leading up to this success, constantly re-evaluating your plan, wondering if you opponent will catch on, holding your breath while their hand hovers over a miniature or pawn, hoping they won’t see what you don’t want them to see. Desperately trying to see through their poker-face and figure out what their plan is. Hoping you haven’t missed some small, but essential detail. Getting more and more nervous and trying to hide it. Trying not to stare at that part of the board, that one small element that your victory will hinge on. Those are the games that I love. This is what draws me in, makes me truly live and breathe a world that previously only existed in cardboard, plastic, dice and rules. I have yet to see the game in action, but from what I have gathered online, Armada delivers this experience, and does so in a world we have all wanted to be a part of since childhood.

I don’t think this is going to be the last Star Wars comic you see from TWP this year. Probably not even this month. People who are not fans should be cautious. They should also get that looked at. I mean, it could be infectious, and then where would we be?