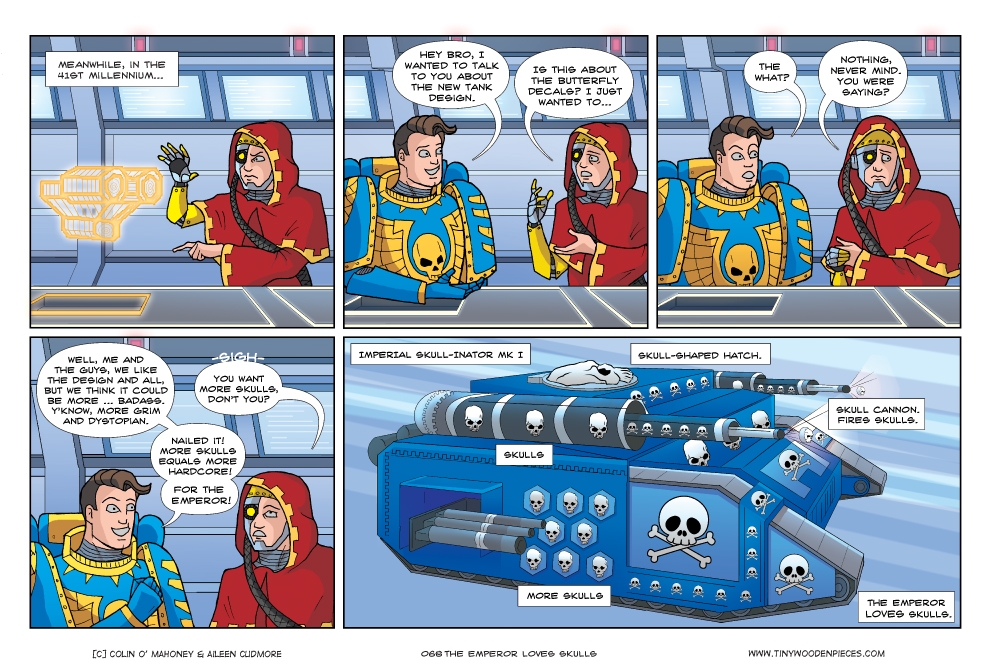 We’ve seen dude-bro Space Marines before, and the characterisation of humanity’s ultimate warriors as meathead jocks just feels right. And they are so much fun to write, I think we will see them again, eventually. Two things to note here: his fantastically awful hair was all Aileen’s design, and I love it. Also I mostly stole this joke from Ger. Thanks buddy!

As for the skull thing, if you’re not familiar with the game and its universe, a look through Games Workshop’s website will show a fearsome, dedicated army whose accessory and decoration needs are catered for in the local ossuary (Bones ‘R Us, up the street from Bones Brothers, and opposite Bargain Basement Bones).

We actually have a Games Workshop store opening in our city (town, by American standards) in the next month, which is great, but my gaming doesn’t intersect with Games Workshop’s range any more. Their stores no longer support specialist games like Blood Bowl and Necromunda, which is where my interest lies. Smaller scale games that allow for more character, and for proper campaigns. A larger scale war game is too much of an investment time-wise, and financially, of course. In the case of Games Workshop, the money involved is a big, scary factor and barrier to entry. But even time-wise, I would love to be playing the Imperial Assault skirmish game, and collecting a little Imperial army. But there are just so many other games to play, that I don’t know how realistic that will be for me.

The X-Wing miniatures game is a constant reminder of this. It is a small scale, fun and affordable miniatures game, set in the Star Wars universe with amazing models, and a pretty quick playing time.

It’s also mostly unplayed. Hell, I have a few days off starting tomorrow. I’m going to shorten this post, dust off the X-Wing rules, and get it to the table tomorrow. See you all next week, when Tiny Wooden Pieces returns to one of our favourite places.

For the Emperor! (Palpatine, that is. I like to play as the Imperials.)