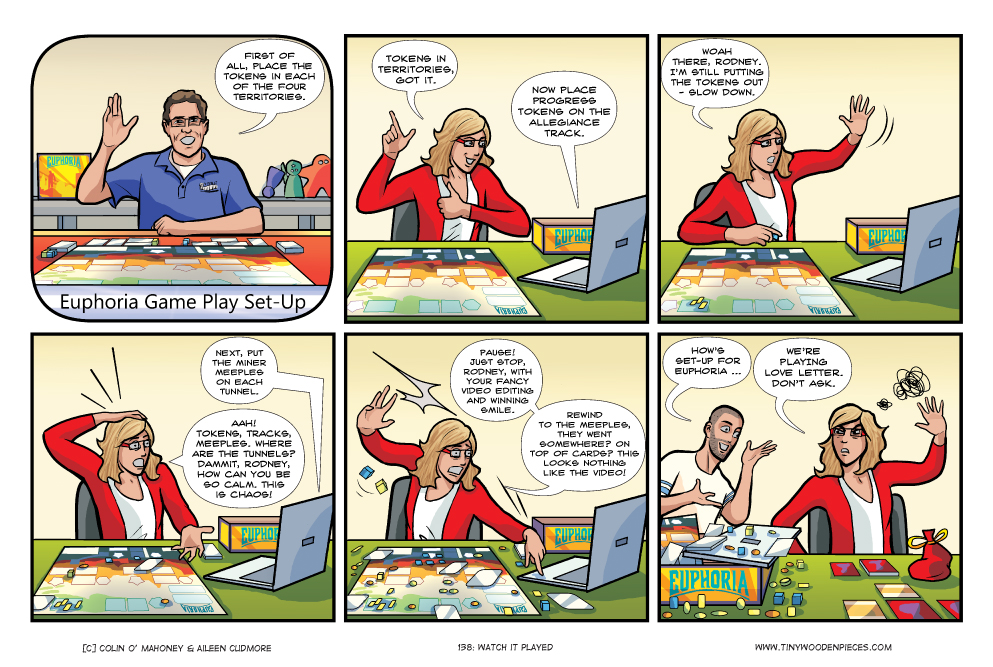 A couple of things to note about this week’s comic. Firstly, this is a true story, just not one that originally starred Aileen. This was a story told to us by our friend Emer, who walked in on her partner Chris trying to set up Euphoria and having a full-blown argument with poor Rodney from Watch it Played. So thanks to Chris and Emer for allowing us to steal this for a comic.

Secondly, this is not meant in any way as a criticism of Rodney or Watch it Played – we just thought an angry reaction was such a stark counterpoint to Rodney’s genial, friendly, practically soothing manner that it was too funny not to go with. So calming are the video presentations of Rodney, in fact, that I have been known to put them on before bed just to unwind.

Sometimes I dream of meeples.

Thirdly, a big thank you goes out to Rodney himself for allowing us to feature him in today’s comic. He is as good a sport and as good humoured as his videos would suggest. And if you aren’t using his videos to help you learn the rules of your board games, then frankly, you’re doing it wrong. I’m generally good with rules, and I am our group’s go-to rules person, but sometimes you just need to see a game set-up and played to get a handle on it, and that’s exactly what Rodney does.

A little over a week ago there was a great article from Geek and Sundry going around – ‘4 Women in Tabletop You Need to Know’. If you haven’t come across it yet, give it a read. Even better is the fact that, by now, the comments section of the article is full of further recommendations of great women in gaming that you can follow. So it is that, for the first time in my life, I am making a recommendation to read the comments.

It is also worth mentioning that the article itself led me to discover the work of another important woman in gaming, which was Teri Litorco, the author of the article. Teri has a broad selection of great videos and articles on gaming, and through reading her work I came across this:

‘3 Actionable Ways to Make Gaming Culture Safer’. Please, please, please give this article a read, and be the person that makes these changes in your community, store, group, company, whatever. Don’t just think about these things: take action. Make gaming the welcoming hobby we all want it to be. I love gaming and I love the community, and I want everyone to have the same positive experiences that I have had. I want everyone to have a table where they can feel welcome, and it is entirely in the hands of everyone already in this hobby to ensure this happens.