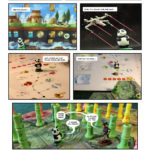 Today is a sad day for Tiny Wooden Pieces. Not only do we say goodbye to our friend Panda, but we are also announcing the end of Tiny Wooden Pieces. We are both truly very sorry to announce that next week will be our final comic. For over three years now we have enjoyed sharing this comic with you, but unfortunately, we have to now call it a day.

There are several reasons for this, but most of all, it is simply a matter of time. Or rather, time pressure. We both love making comics, and that is something we are both going to continue to do. But we no longer feel we are producing our best work on a weekly schedule. This is something we have been considering for a long time, and have talked at length about. As much as we love the comic, we do not want to continue with something that we feel we are not giving our best work to. Our next comic project will be something that we can spend a lot of time on before even announcing, let alone releasing.

More than even making our beloved comic (beloved to us, at least), we are going to miss the wonderful community that has been part of this site. What we will miss the most are the friendly, fun, funny, and inspiring comments from many people we now consider friends, even if we have never met you.

We will keep the website up, and maybe one day we will once again do something related to board games. I have been thinking about doing reviews, or something similar, and maybe this site is the place to host that. In the meantime, if anyone wants to send me board games for review as part of another site/project I would be fine with that 🙂

We will definitely keep our twitter and instagrams up. While there might not be much activity on them, at least we can still feel connected to the wonderful community of board gamers out there, that we are proud to call our friends.

We will return next week for one final comic, and I hope you will all join us then, one last time.

Tags: Above and Below, board games, miniatures, Near and Far, panda, Star Wars: X-Wing, Takenoko, Tokaido
46 Comments on Panda-emic 5! 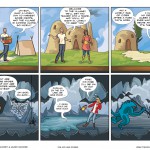 It took three games of Above and Below before it really clicked with me.

I realised afterwards that with each of my first three plays I was essentially adjusting my expectations until they matched the game I was actually playing. When they did, when I understood its weight, and where on the spectrum it fits, I loved it.

Above and Below is a worker placement, village building, gorgeously illustrated game whose unique selling point is the addition of a storytelling element. Shortly after breaking foundations on your village, your would-be real estate development moguls (villagers) discover a network of caves directly below the site. When acquiring new buildings in the game, you can choose to do so either above ground or below. If you choose below, you first have to send some brave, lantern-bearing explorers (villagers) into the system of caves to find a good spot for an underground outpost. At this point, you randomly determine a, well, a random encounter from a generous manual that comes with the game. This will give you several options that will test both the attributes of your villagers, and often your own morality (or lack thereof). Bargain with the blind merchant, or beat him up. Help rescue the fish boy, or ignore him and grab the tempting looking locked chest.

On first play, the story-telling element seemed light, a little too random, and often not worth the effort it took in terms of in-game resources. Meanwhile, the worker placement, village-building aspects didn’t seem to offer enough depth or options to really satisfy me. It seemed too light to be engaging, and too limited to warrant much replay.

The second time we played, I had already adjusted to the (really quite short) limit of 7 rounds in the game, and changed my strategy accordingly. A resounding defeat to Aileen in that game taught me quite a lot about the victory conditions, and exactly what mattered and to what extent.

Game three was with three players, which definitely added to the experience. More people meant the resources were cycled through a lot quicker, and a lot more then became available in their place. By then I had also learned that the storytelling was not in and of itself an overly important part of the gameplay. While it was arguably what got the game so much attention in the first place, it’s a simple enough mechanic, the trick to which is just to allocate the correct amount of resources (villagers) to it. It is merely another place to put a worker, albeit one that adds a lot of colour and welcome humour to the game.

Above and Below is a much lighter game that I first thought, but it knows this, and the tight round limit means it never outstays its welcome at the table. There are multiple paths to victory, and a variable set-up and randomly drawn buildings and resources mean you will have to adjust how you play, each time you play. It’s easy to learn, and easy to teach. The artwork is amongst the nicest in our collection, and the storytelling aspect, although slight, adds a fun dimension to it. In short, it’s a gem of a game that engages without taxing, and it’s one that I’m very eager to keep on playing.

And in case anyone is wondering about our own morality, somewhere in a dark cave underneath an innocent looking village there lies a blind merchant, robbed of his wares, hoping to find help before the fish people find him. And Aileen will try and tell you that she is the nice one…

Tags: Above and Below, city building, exploration, storytelling, thematic games
4 Comments on Ups and Downs