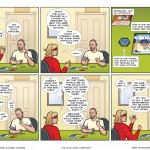 Those of you that play Netrunner are probably shaking your heads right now, or nodding in sympathy with Aileen. But, honest to God, this gets me every time we play. So you can just imagine how well I handle the actual game itself. I do think I kind of love it though. I think.

Netrunner looks similar enough to an ordinary, garden variety collectible card game. You draw cards every turn, and then play those cards based on the resources you have. You grow stronger each turn as you play cards. This continues until you defeat your opponent. But a closer look shows that while Netrunner appears to be similar, this is merely familiar skin stretched over the exoskeleton of something wholly new, different, and not a little intimidating. It’s a game of careful resource management, planning and strategy – not just in the deckbuilding element, but in the gameplay itself. It’s a game of cat and mouse where the mouse is just as likely to turn on the cat. The gameplay is quite mechanical and rewards cautious thinking. But equally, it relies heavily on bluffing and misdirection. I didn’t know what to make of it when I started, and to a certain extent, I still don’t. The game is utterly unintuitive. It doesn’t ‘click’ halfway through your first game. Not in the least. The elements that make it up don’t necessarily interlock in the manner in which you would expect. Both sides have several paths to victory, and I never have any idea which path to follow. And that’s after more than 10 games.

Of course, that is not to say the game is not well designed. It’s brilliant. It is a compelling and evolving deck builder that is built with scaffolding raised by none other than Richard Garfield, the Father and Founder of Collectible Card Games. And it’s the highest ranked card game on Board Game Geek. It rests just one spot outside the top ten, in fact. Despite its odd form and a learning curve that would make a statistician cry, it gets its hooks into you very quickly. It is puzzling and tense, gripping and dramatic. I am certain its design is brilliant, I just couldn’t explain how.

We keep dipping in and out of it, but never stay long enough to immerse ourselves in it. Always too many other games to play. Also X-Wing. Still so much X-Wing. X-Wing is, in fact, looking to be the game I have played the most of in a long, long time. And despite this eating up time I would love to spend on Netrunner and countless other games, I can’t say I actually mind. Not at all.