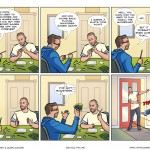 My slide back into the pit of miniatures gaming has been slow, but not completely surprising. The signs were there. Technically, in fact, I am already there, and have been for some time. X-Wing probably accounts for a good 50% of our gaming time so far in 2016. And as much as I was fond of telling myself otherwise, it is a miniatures game. The squad sizes are tiny, and you don’t have to paint a thing. There isn’t even any terrain or giant gaming boards to worry about. All this helped in the lie, as I bought ship after ship after ship. ‘It’s just because I like Star Wars!’ I would tell myself. But I can no longer lie to myself. Well, not about this, anyway.

But a man has to have principles, even if they are principles that are picked up on the retreat from previously held ones. So, for now, I hold firm to one last line: no more blind booster packs. Even if I helplessly expand existing games with more units, expansions, rules, figures, paints, cards, I can still hold on to one thing: I will know up front what I am buying, and I know that it is useful to me. My purchases won’t be blind, and my collection will be finite. 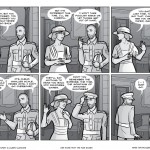 Tiny Wooden Pieces returns! Or rather, we return to our scheduled programming. I had a lot of fun organising the guest comics over Christmas, and loved having so many great people on the site. The reaction seems to have been positive, so it’s already in motion for next Christmas, and for a break myself and Aileen will need to take during the year.

Meanwhile, it’s good to be back in the driving seat, re-discovering how much fun it is to make comics with Aileen, and having so much fun poking fun at the hobby we both love so much.

Which brings me nicely back to the comic. I’m not there yet, but fool that I am, the call of Bolt Action is strong. It’s seems to be a nicely realised war game with a genuinely affordable buy-in. It covers World War II (hence the B&W style of today’s comic), which for me is a particularly arresting period of history. The miniatures seem to cover every army, faction, period, and armament of the conflict, offering a nicely broad range of styles and strategies to choose from. I still have a range of paints and brushes from the last time I gave Necromunda a go. But of course, I also have a half-painted gang from that time as well.

Interestingly, today’s comic is sort of a reverse version of Dave’s comic from a few weeks ago.