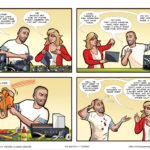 One of the (many) wonderful things about board games is how it brings out the inner crafter. It certainly has brought out mine. Assembling and painting miniatures, printing and cutting PNP games, customer storage for card and miniature games. There is nothing quite like the satisfaction of completing a project, be it anything from Lego, to a Kallax, to homemade dice tray. And board gaming provides plenty of opportunity for crafting projects of all stripes.

Prime amongst this is probably storage solutions or inserts. While you can buy amazing solutions online, I always prefer to at least give it a go myself. Not least because shipping to Ireland is a continual thorn in the side of our hobby – everything from Kickstarters to accessories – that’s what we get for living on a tiny island.

I recently tackled FFG’s Arkham Horror CCG. While the box will fit everything plus expansions, sorting the cards is a serious issue. There are far too many categories of cards for each deck and scenario, which meant every time we wanted to play we had to pull everything out and sort through it. The time spent on a box where we could divide the cards into categories with ease was worth it.

Next up, I intend to tackle Eclipse. Again, the game has plenty of room in the box, but there are literally hundreds of tokens and counters, and set-up is sanity-sapping and fiddly. If there is any game in our collection that I would love to see hit the table more often, it’s Eclipse. So if there is anything I can do to help that I will. 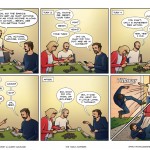 I have a feeling this will not be the only comic to bear the title ‘Table Manners’. Issues like this (table etiquette, I guess you could call it) are oft-discussed (just listen to the questions segment on any Dice Tower Podcast). Phones are not the end of it, and neither are they even the beginning.

But they are tricky one. People are people, and these days phones are part of people. Asking people to put away their phones at the table seems a little … school-ish? It’s not that I don’t want to do that, it’s more that I don’t want to have to do that. I would rather that situation just not arise, that people would come to the table with respect for the company they are in.

END_OF_DOCUMENT_TOKEN_TO_BE_REPLACED 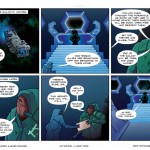 Eclipse has the single darkest, most horrible mechanic of any board game I have played. Not the traitor card, though. Aside from being kind of hilarious, that is actually a great mechanic. Eclipse handles alliances very well, making them a functioning mechanic in-game, not just a hand-shake agreement between players. There are tangible benefits to being in an alliance (diplomatic relations, as the rules refer to it) with another player. Of course, it also means you can’t pass through their territory, not unless you want to earn the stamp of a betrayer. Attaching a stigma to treachery is thematically very sound, and backing it up with minus victory points works very well.