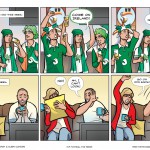 For those not of Europe, or those even further removed from the sporting world than we are, the ‘Euros’ are currently on. This means Ireland collectively goes down to the pub a few nights a week to watch our national team play soccer.

At the time of writing the comic, Ireland had managed one defeat and a draw. However, by the time of writing this blog post, they had added a victory to this tally (1-0, exciting stuff, right?). This has in fact allowed them to qualify for the next stage, so I guess the competition could not accurately be described as fierce. Nonetheless, even the most die-hard fan would admit that getting to the this stage was far from likely, so it is a big deal for a country not given to major sporting success in this field. The media coverage, and national interest, has felt ubiquitous.

There genuinely was whooping and shouting and cheering in our house. That was not exaggerated for comic effect. That was one of the most tense, grim, action-packed, exhausting and satisfying hours of television I have ever seen. Mostly thanks to what was probably the best battle scene ever filmed for film or television. From when Ramsay sent Rickon running across the battlefield, until Jon Snow grappled him to the ground, it didn’t let up for a minute.

As absorbed as I was in the episode, I don’t think I realised exactly how invested I had become in Game of Thrones until the Stark Banner was unfurled again at Winterfell. I couldn’t then help but join in the cheering, in that sense of justice, relief, finality and bitterly won success.

The only board game related note that I can add to this is that we will definitely be playing the Game of Thrones board game the next chance we get. Although it will be a little strange to visit a Westeros so changed, holding hands of cards filled with characters long since deceased. It will almost be nostalgic, if a little tragic.