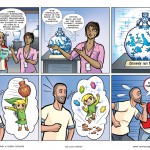 I guess this week’s comic is a bit of an obvious joke, but I couldn’t resist the silliness of it. Although framed here as a video game reference, the whole crate/vase/loot relationship is just as likely to be found in board games. In related news, we have been playing Imperial Assault, and are loving it. Dungeon crawl games don’t hold any great appeal for me, but dress the archetype in a Star Wars hat and I’m all over it.

As anyone who has ever watched either Clone Wars or Star Wars Rebels knows, upon construction of any new building or hangar, standard Imperial policy is to immediately and haphazardly cover the area in crates. While in the cartoons this provide a constant source of cover during firefights, in Imperial Assault they have the additional benefit of being packed with goodies to help the outnumbered Rebels in their mission. And boy, do they need it. IA is hard for the rebels.

Of course, it’s entirely thematically appropriate the Rebellion is outnumbered and outgunned at every turn, and this does add an excitement to the game. It also forces the Rebel players to work together, and coordinate every single action point they spend. In other words, it makes it a truly cooperative game. There is nothing worse than a co-op game where each player basically does their own thing, with little interaction or planning amongst the group. In that kind of environment you might as well be playing a competitive game. Co-op games like that hold little appeal for me; instead, all of my favourite co-ops encourage true cooperation – Pandemic and Ghost Stories being two great examples.

So far in our campaign, the rebels have won once and lost once – but both games were extraordinarily close. We are definitely learning as we go, and our heroes are gaining in attributes and abilities, but of course so is the Empire, and the missions are only getting harder.