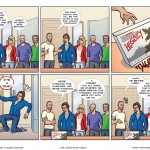 The idea for this comic was 100% generated while chatting to Drew and Erin on the Boardroom Podcast a couple of weeks ago. We had a lot of fun recording it, so maybe it’s fun to listen to? I would like to think so. I can’t remember exactly how the idea came up, and I have no desire to listen back to a conversation featuring myself to find out. I mean, I totally think you should listen to it; I just don’t like the idea of listening to myself.

Um, moving on then … Aileen is right regarding locked room mysteries: we have been there before. And of course, we’ve covered our long-running Risk Legacy campaign before as well, here and here.