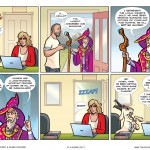 The Union of Wizards

It’s strange to look back and realise that in over 100 comics we have never featured a wizard. We have had most of board gaming’s staples: zombies, dice, dungeons, Catan, combat, cards, dice, collectibles, expansions, war, Shia LeBeouf. But oddly, no wizards. Or mages & clerics, as I gather they are more commonly known now.

I guess there a couple of reasons for this. Firstly, neither Aileen nor myself ever did any roleplaying. In fact, Fiasco is as much as we have ever done. So we don’t have that grounding in D&D that is very common to gamers of our age, who would have been weaned on swords, magic and D20s.

Secondly, once we leave the grounded realm of trading, settling, economics and historical settings, we both tend more towards sci-fi than fantasy. This is broadly true in our other interests as well: reading, TV, video games, dressing up like aliens and pretending our couch is a spaceship. That kind of thing.

As good a game as Descent is, it never grabbed us until Fantasy Flight put it in a Wookie suit and called it Imperial Assault. The same with Mage Knight: now that it’s had some pointy ears glued on to make it look like a Vulcan, we’re all over it. Theme is just too important to both of us. A game needs good mechanics, obviously; otherwise, it would never cross our table. But that alone is never enough. Its setting, its world, the story it tells has to interest us as well. Gaming is more than just sitting around a table rolling dice and playing cards. It’s weaving stories with our friends. It’s creating characters and worlds. It’s that unique alchemy where cardboard, dice and cards become something so much more. And that something is the experience of playing games and creating stories. It is, ironically, magical. Almost as if a wizard is always involved, regardless of setting.

We are hoping to do more roleplaying in the future, so it does seem likely that this will put us in touch with our bearded side. Will this be enough to keep the Wizard’s Guild off our backs? Time will tell. Right now, I think it’s more important that we keep the Zombies Union from sending around a representative. Took us weeks to get the gore out of our carpet the last time that happened.