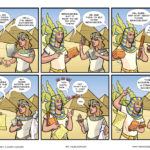 Well, I couldn’t not make a pyramid joke. I am only human, and a pyramid scheme joke while playing ‘7 Wonders’ is as inevitable as a wood for sheep joke during ‘Catan’. Except of course, being a pun, I would argue that the pyramid scheme gag is a far, far higher form of humour.

In a continuing theme of playing our way through some of the more glaring omissions in our board gaming lives, we finally got to play ‘Lords of Waterdeep’ a few nights ago. I was dubious going in. As much as I had heard what great game it was, I had also heard that it was a rather average worker placement, and it was just the D’nD dressing on top that got people so excited.

After one playthrough, you could categorise my level of surprise as ‘pleasant’. It looks top notch, with a very nice board, solid components, and enough artwork and flavour text to make the theme feel more than just mere set dressing.

We played a six player game with (I believe?) all of the expansions rolled in. There were enough options open every round to keep your mind on the board during down time, and the ratio of players to spaces available on the board was just about enough so that while you couldn’t wholly rely on your plans, you didn’t find them in tatters every other turn.

On top of vying for board space, there were a few player interaction elements – although more than some of these might have come from the expansions. Again, the balance between being able to hamper your opponents while not being able to completely derail their game seemed to be finely tuned.

Despite lacking the opportunity to use pyramid-based puns, it is a game I want to try again. One play is enough to interest me in more, but I don’t yet feel I have a handle on its depth or replayability.