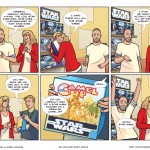 I believe satire to be an important function of comedy. In this way, and in many others, comedy, and comics, can be a vehicle for commentary, criticism and opinion on its subject matter, be that politics, society, religion, or – in our case – games.

While we will always shy away from being harsh or cutting for the sake of it, some healthy cynicism is, well, healthy, and the incoming avalanche of Star Wars merchandise, games and nonsense would seem a fairly appropriate target. But as fitting a target as it may be, Tiny Wooden Pieces will not be aiming at it. Because here at Tiny Wooden Towers, we freakin’ love Star Wars, and are genuinely super-excited at what looks to be a return to form for the franchise. Like Jawas at a scrapyard, we are eagerly picking up anything and everything in its wake, and basking in pure, unabashed, child-like joy. Star Wars is back. And it’s really back this time.

So in terms of commentary on the crass commercialisation it will bring with it, we are the very suckers that we should be skewering, and we couldn’t be happier about it.

I mentioned last week that we had a plan to keep the comic updated over Christmas while myself and Aileen took some time off to recharge and play games, and talked about it a little more in the comments. I’ve been feeling for a while that my writing has been hovering close to repetitive, and I haven’t been happy with it for a while, so I want the time off to re-focus and for us to come back better.

So our plan is for about three weeks worth of ‘guest’ comics, where we get some super-talented friends of ours to fill in for us. The comics will remain game-related, and having already seen the scripts we will be using, I promise you, the quality will not suffer in the least. In fact, I think the variety will improve things. This will begin a week or two into December, and I’m genuinely excited to share these comics with everyone. Further into the new year we plan to give the site itself a much-needed overhaul, but more on that closer to the time. Although, while I’m on the subject, if there is anything you would like to see on the site, or improvements you think we could make, let us know in the comments. We would love some feedback on it before we get into the serious planning stage. 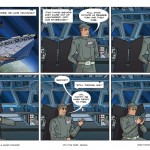