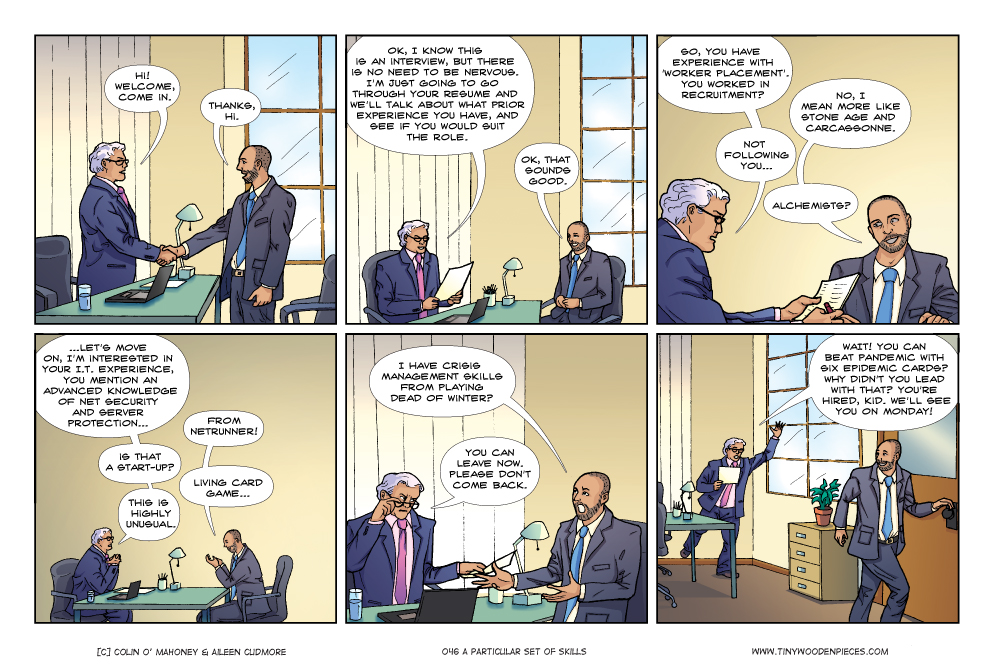 It’s been a long time since I wore a suit to work. It’s been even longer since anyone referred to me as kid, mind you. I gave up suited work years ago in order to spend more time doing what I love, and to become more focused on myself. A big part of doing what I love is writing, and in turn, a big part of that is writing comics. A weekly webcomic is a great discipline for any writer, or artist. Despite the stress and literally constant deadlines, it’s absolutely worth it. Nothing teaches writing like actually writing.

I still work. I have a nine-to-five, but it’s work I’m happy with, that suits me better, and allows me time to write. And being able to write is what makes me happy. That’s the funny thing about chasing your dreams, I guess. If you do it right, you don’t even have catch them to be happy.

I did look mighty fine in a suit, though.

You can’t say that Tiny Wooden Pieces doesn’t bring you to a wide variety of places. Last week we were on location at the exotic Cursed Island! This week, we travel to a . . . well, a pretty mundane office for an interview. But that, I hope, reflects one of things that never ceases to amaze me about board games – that the themes of games can be about absolutely anything and can take you absolutely anywhere. And that the mechanics of a good game can make you care deeply for something that initially seemed like the most boring thing in the world. At the moment, I’m wondering if Panamax would spark my interest in managing a shipping company, but as I’m unlikely to be playing that anytime soon, I guess I’ll just have to settle for regular old city-building and rooting out spies.

We got a bit excited this week about the launch of the Kickstarter for Thunderbirds, designed by our favourite interviewee Matt Leacock. After only a couple of days it has smashed its £20,000 goal – and with over four weeks to go, who knows what the final figure could end up being. The economics of Kickstarter for board games is fascinating, none more so than for the phenomenon that is Exploding Kittens. After raising over $8.7 million, it looks like the creators are set to do very well out of it. But first they have to fulfill the Kickstarter pledge with their 200,000+ backers. These guys have a LOT of work ahead of them.

As regards this week’s comic, playing board games does help you develop lots of skills – and I love the thought of highlighting some of these during an interview. If only that could happen. But the real question for me is, what fictional position do you think Colin was going for? And why, why, why, did he not shave beforehand? Answers below!