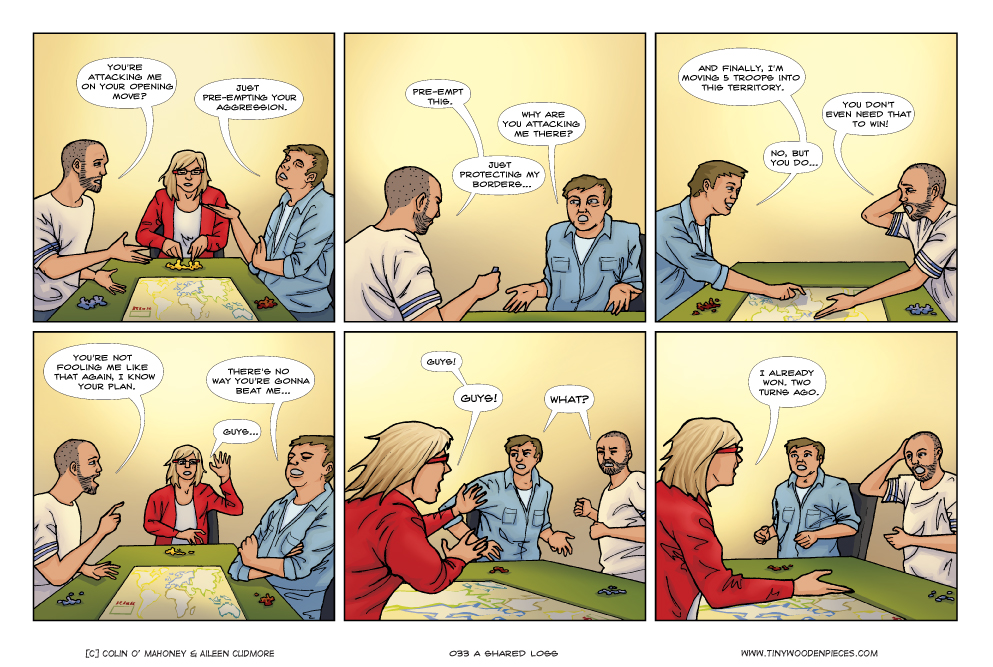 We have all heard it, and we have all said it. Entrenched in Risk: Legacy campaign I’m hearing it quite a lot these days, sometimes even from my own mouth.

The difference is of course, when I say it, it’s true.

This comic is based on an infamous game of regular Risk (not the Legacy kind) where myself and my friend Ger expended so much effort intentionally aggravating each other that Aileen had very little trouble in sneaking up on us both and winning in about the time it took you to read this far into my blog post.

And yes, I still play regular Risk. Of course it has its issues, but it’s the first real strategy game I ever played, and I think I will always enjoy what it offers. A kind of straightforward strategy coupled with the simple pleasure of good ol’ fashioned world domination. I think I will always be able to enjoy that.

The point of the comic is not, of course, Risk, but what happens when you bring personalities and grudges onto the table. How much fun any game is depends on who you play it with, and the dynamics of a group will always determine how a game plays. Actual grudges can be a problem, but  some personality and fun on the board usually makes things more enjoyable. Here at Tiny Wooden Towers, home to our webcomic studio and ever-growing collection of cardboard and plastic, we have always loved board games because they are about people. That’s what is most important, and the most fun for us in playing games, so the idea of that spilling from the table and onto the board itself is natural. Not every game allows for this to happen, but when they do, it tends to enhance the stories told in games, and the stories we tell long after the game itself is packed away.

Going nuclear at the gaming table

Oh my god, so this actually did happen. And it resulted in the shortest game of Risk that I’ve ever been involved in. But it was not something either of the two guys ever intended on doing. It was just that they knew exactly how to push each other’s buttons.  And when that sort of thing starts, it can be very difficult to stop. You can’t just back down from that kind of antagonism! For everyone else in the game, it may initially be quite funny and even lead to easier victories. But if it happens again, this situation can become a bit frustrating and threatens to weaken the overall game experience.

But fear not! There are ways around this. If people are in an overly belligerent sort of mood, it is probably better to gently suggest that they break away from the main group and begin their own little two-player game. Let them have their own space to begin their all-out war. Let them get it out of their system. And of course, there are always plenty of other non-aggressive games to choose from. I really should have done one of these things.

It is worth noting that we all learned a valuable lesson that day, or rather, the two guys did. They’ve largely avoided such situations since. And they’ve been super careful to watch all my movements in every new game we break out. It’s as if they think that I have some nefarious plan to get them to attack each other while I waltz away with the victory. No matter how much I protest that’s not what happened! While this does mean that I now find it extremely difficult to ever win any game between the three of us, this is actually a good thing. Because now we can be sure that there is always going to be a real game between all three of us.