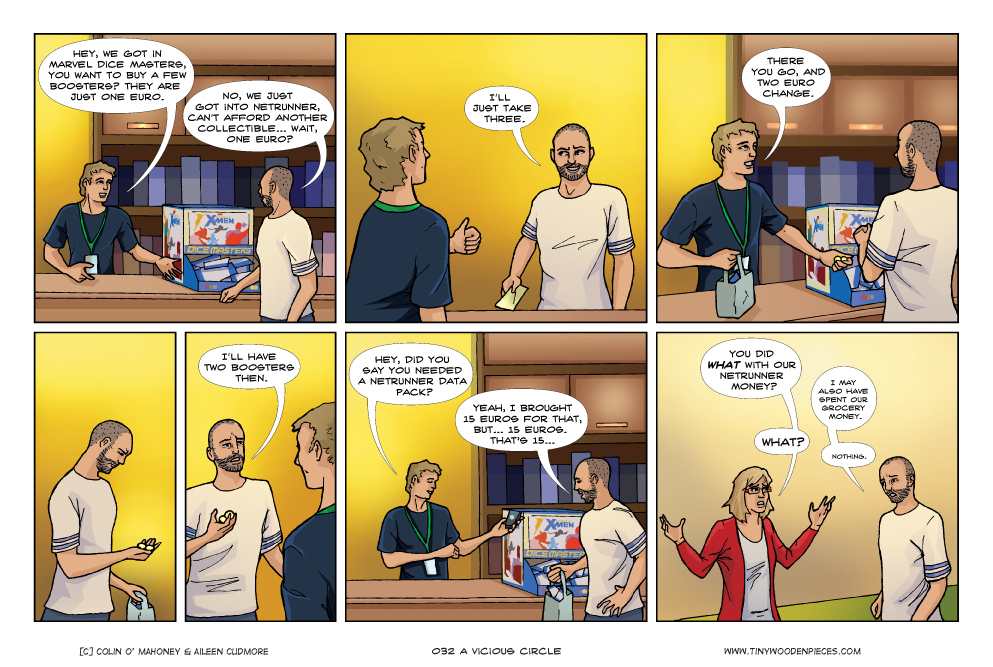 My blog post is a little scattered this week, for a more coherent, and relevant-to-the-comic piece of writing, skip to Aileen’s post below.

Still with me? How generous.  Have some kind thoughts, free of charge, and don’t act like I didn’t warn you when I skip from talking about games to maybe that should read “writing about” rather than “talking about.”

At the time of posting, there will only be a few hours left in the Jack Vasel Memorial Fund auction. Tiny Wooden Pieces is auctioning a chance to appear in our comic, and to receive a colour, signed print of this comic. Bid here, and learn about the charity here. Please do support this any way you can. But be warned, some crazy person has already bid more than $200 on it. If this is too rich for your blood, or you have no interest in being made fun of on an internet comic about board games (sorry people-who-already-bid, no take-backsies) then there are plenty of actual board games you can bid on as well.

We spent most of our week in London, which included a visit to the fantastic Orc’s Nest games store in the city centre. After buying some Dice Masters boosters (and Netrunner Data Packs) we were standing around outside trying to figure out how to get to our next destination, so I went back inside to ask directions.

I came back out with more boosters. In my defense, I did also get the directions we needed.

Having spent the week travelling, we didn’t get much gaming done. A couple of Netrunner decks travelled to London and back, spending the bones of a week in my shoulder bag without us having a chance to play it once. So we are very much still getting to grips with Netrunner, and articles like this lead me to believe the what I consider to be ‘getting to grips with’ could more broadly be interpreted as ‘might as well not have opened the box yet for all we really know about how to play Netrunner.’ But that’s a bit of a mouthful, so “getting to grips with” is what I’ll keep telling myself.

From the little I have played so far though, I think I’m going to like it. I miss deck building. I love the feeling of crafting, improving, tinkering, testing, thinking, writing alliterative lists. Having played our handful of games with just two of the factions included in the box I’m eager to test others out, see how they differ, get a feel for the different styles of play, see what I enjoy, how I would like to play the game. And once I figure that out, to build my own instrument for playing the game just how I like it. To field a weapon entirely of my own devising. I can’t wait to get properly sunk into the game, to get past scratching the surface and delve deep enough into its processes and routines, to know enough of its programming language to be able to write a clever analogy about playing Netrunner without sounding really clunky.

In other news, later tonight we will be playing game four of Risk: Legacy. Love it so far. It’s the kind of game where two hours of play leads to at least 30 minutes of post-game discussion and dissection. An engaging post-game talk is always a sure sign of a good game. It is really scratching a strategy itch for me at the moment, and with a bit of luck, will continue to do so all the way to the conclusion of the 15 game campaign.

Boosters are exciting. Just so exciting. In fact, we were so thrilled with finally getting access to boosters that we adopted a special opening ceremony with our very first pack. Because the marvellous thing is, you just don’t know what lies inside. Like a Kinder Surprise egg, but without all the lovely chocolate.

So what we naturally found ourselves doing is playing a guessing game with the boosters – yes, yes, we tried to predict each character using only the dice. Crazy, right? But it really is a lot of fun. As well as being a supreme test of everyone’s knowledge of Marvel characters. It’s a game within a game!

“The pale die with the pinkish helmet must be Magneto – yay, we got a Magneto! And that dark one with the three yellow slashes is obviously Wolverine. But what is that red die there? And that grey one? I think it’s time to check the cards . . . oh, the red one is Mystique. Funny, I would have thought her dice would be blue . . . And the grey one is Cable. Heh, I forgot all about Cable . . . ”

After finally reading the cards and discovering all of their special abilities, we celebrated by gleefully rolling our brand new shiny dice. I think it’s important to enjoy these moments. After all, one of the very many wonderful things about games is the opening of new boxes and packets that contain real stuff inside.

So, does anybody else do this? Or do you just tear into each pack? There is no right or wrong way, but I would like to think that everybody has their own little quirky way of opening boosters.