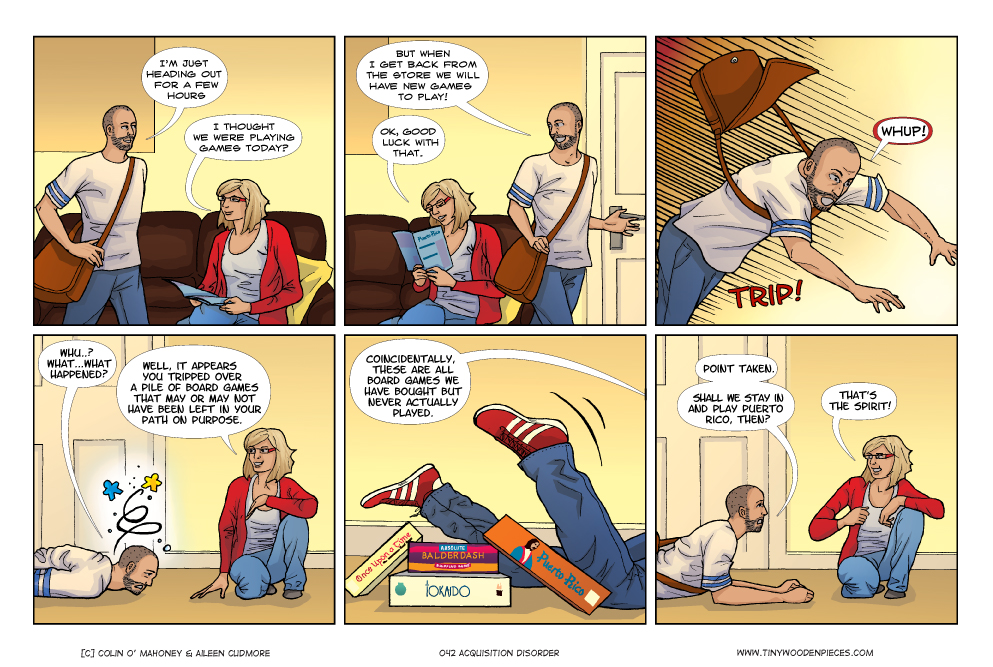 Is what Aileen said when I read her the rough outline for this week’s comic and got to panel 3 where I tripped over the pile of games.

I mention this in passing.

In an effort to combat the problem of both unplayed and underplayed games, we will be undertaking Sarah Reed’s excellent 10 x 10 challenge in 2015. For those who don’t like following links, here’s how it works:  we are picking 10 games we own and will be playing each of those games 10 times in 2015. It sounds easy. From the vantage point that January provides of the year to come, I find myself looking out over the 11 remaining months and thinking how easy this challenge will be, how soon we will complete it.

But then, from over the hills of coming months the new releases begin to emerge. Imperial Assault, Alchemists, XCOM, Thunderbirds, all popping into view, closer than I thought. The list could go on, and the slope is treacherously steep.  The lure of the new is strong, and exciting. Why would I want to spend time wiping of dusty lids and opening musty boxes when everyone else is getting excited for Mysterium and talking about Cthulhu Wars? How could I consider playing Cosmic Encounter when Pandemic Legacy is on the way? All of which is to say, the challenge will no doubt be challenging. No doubt this is why it has been called such.

The point of the exercise is to focus on brilliant games we already own. To enjoy what we have, and stop looking forward to future experiences at the expense of what we already have. And put like that, it sounds almost like there is a life lesson in there somewhere…

Of course, the challenge has the bonus victory condition of also helping to solve a separate problem: I couldn’t afford all the new games I wanted even if I was as rich as an Exploding Kitten.

In order to help myself stay the course, I’m going to make the list a matter of public record, available to be freely consulted, to exhort my victory or compound my shame, as the case may be. In 11 months’ time, you may do either, as appropriate.

We will be adding this list to the official Geeklist on Board Game Geek as well. Anyone else going to join us?

January often seems to be a good time for resolutions. So while poking around the internet with this week’s comic in mind, I stumbled across this Challenge on BoardGameGeek (an alternative to the 10×10 challenge that Colin describes above). The aim is simply to play 15 of your hitherto unplayed games before the end of the year. While we don’t quite have 15 unplayed games in our collection (although when Kickstarters and P&Ps are included, there are quite a few), I do think it is an excellent idea. And even better, it makes playing games a kinda game in itself.

Of course, we are already one month into the year for this challenge, but relax, we still have 11 whole months in which to play 15 games. So it’s still easily achievable, and worthwhile. I mean, it does pain me a little to think of those poor abandoned games, once so shiny and new, sitting on the shelf sadly collecting dust. But no more, not this year! The only thing standing between me and a game of Puerto Rico is the rulebook. Which I will read soon. Although this does mean that I will be responsible for explaining the rules to the other players, a prospect that I find oddly daunting – Colin normally fulfils this role for me. So maybe that could be another resolution for the year, to take on the duty of teaching games. Or at least one or two, we’ll see how the year goes . . .