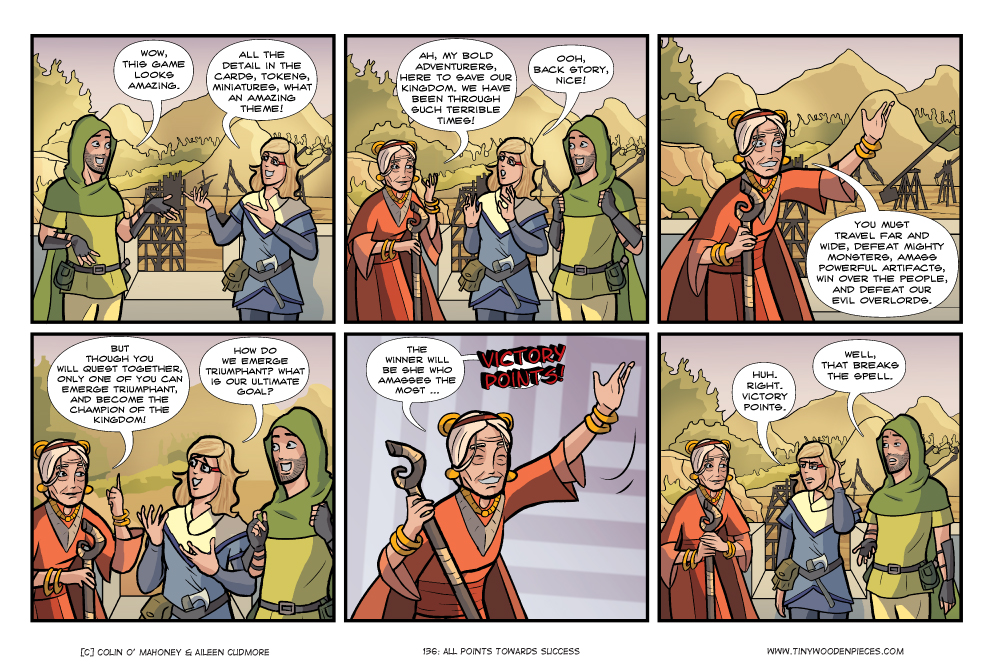 Theme matters. Of course theme matters. I’ve talked about how important theme is to me before, often at length. When I am playing a game, I want to be immersed, involved, enchanted. I want to be transported to its world; whatever that world may be.

When I play a game, I would rather the mechanics not to be naked. Rather than thinking about collecting resources and managing my hand, I want to be struggling to get enough food to feed my villagers, and agonising over what the best use of my time is in order to keep them fed into the next turn.

You can draw a perfect analogy with story here, whether it be film, television, comics, or movies. They all have a plot – a series of mechanisms to move things forward, interest us in the characters, and help things to make sense. But the plot should be hidden behind the story. If the story is good enough, it will draw an entrancing veil over the plot.

A game is a much more of fun experience if I am immersed in it, and engaging with the other players in it, rather than outside or around it. Some games do this well, and occasionally games do this exceptionally well.

There is an odd blind spot, though, even in games that are otherwise excellent examples of marriage between theme and mechanics. And that blind spot, that bane of so many board games, that spoiler of theme, and destroyer of worlds is so often victory points.

Small though that element is, it is what ties up the game; it is what everyone aims for, and thus thinks about during the game. It is not confined to the end, but seeps into the whole experience. If, during a game, you are building a civilisation – be that village or empire – there is surely a better metric for success than ‘victory points’.

I understand the difficulty that is presented here. In any reasonably complex game you will be playing towards several goals – building, gathering, exploring, currency – and there has to be some method of measuring everything together at the end. And neither am I saying that adding together elements at the end is a bad thing either. Games where the winner is obvious before the end become boring and frustrating for the other players.

The idea of a victory points track in and of itself is a solid mechanic. But like every other mechanic in thematic games, it needs to fit into the world of the game. In a thematic game, players should not feel like they are playing cards or rolling dice, they should always feel like they are committing crucial resources and hoping to beat the odds. So it is odd to me that victory points is so often overlooked, as though it is just a given, a mechanic set in stone that is not thought about during development.

In other news, we’re on Instagram now! We’re putting up pictures of games we play (if we enjoy them and they look pretty) so you can follow us there.