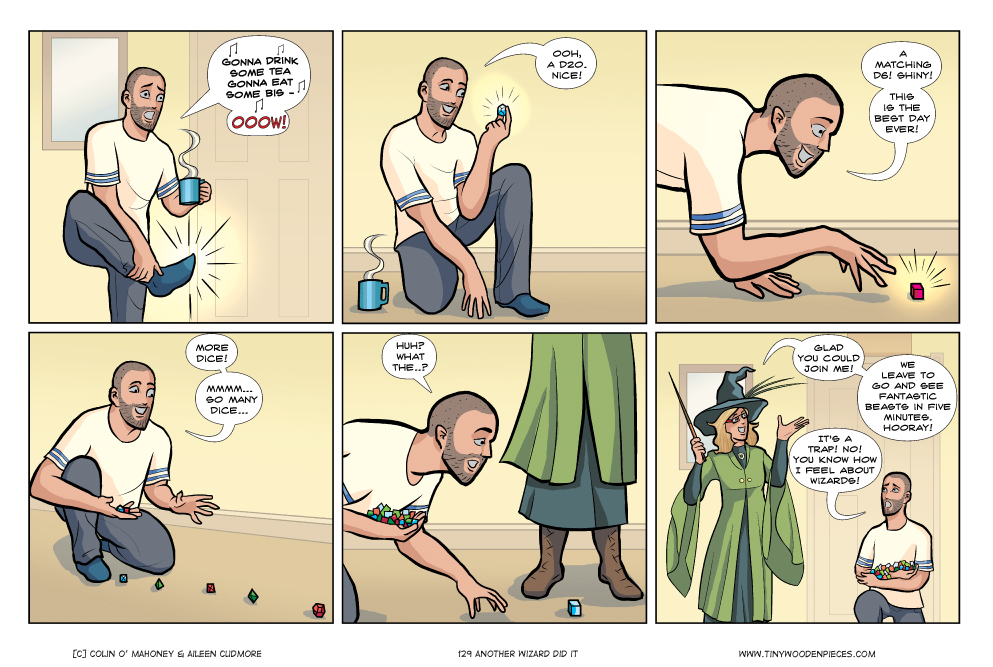 The Importance of Rolling Dice

If you’re a newer reader, here is a reminder of how I feel about wizards.

I think I just find it hard to move past that old stereotype of the pointed hat, white beard, and purple robes. Having never played D&D growing up, that stereotype was never challenged. And by the time the Wizard’s Guild hired publicist JK Rowling to radically transform their image, it might have already been too late for me. I have seen a couple of the films, and while I did think they were fun, they failed to really captivate me. Although I will admit that having never attempted to read the novels, I am likely to be missing the real magic.

However, I’m not a completely heartless monster, and I will admit to being charmed by the look of the trailer for Fantastic Beasts. Potter-verse aside, it looks like it could be a really fun, colourful adventure. Exactly the kind of film that would make for a good cinema trip in a cold winter month.

While this week’s comic might not be based on real events, it is certainly true and faithful in spirit. If Aileen, or indeed some person more nefarious than her, did ever need to lure me unwittingly into a trap, dice would work 100% of the time. I crave dice in my games like others seem to crave miniatures in theirs. And it’s not for the random element. I much prefer the balance of a game to swing on planning, strategy, scheming – any one of these wonderful things. It is the tactile nature of dice that appeals so much.

Whenever a new game comes into our possession (oh, what a glorious thing!), its unboxing will follow a by-now standard procedure. Once the shrink comes off, Aileen will occupy herself with the olfactory delights contained within. Nothing makes her happier than the smell of new board game, and she could easily lose hours to this pursuit.

Meanwhile, I will be digging around in the box for the dice. Once in my hand, I will assess their heft, feeling their weight, design, quality, and colour. And of course, test them. In the parlance of a younger generation, see ‘how they roll’. Do they make a satisfying noise as they collide in my hand, and then hit the table? Are they clunky, or clacky? Do they bounce, spin, or stop disappointingly? Will the test rolls produce a good omens, or ill?

For my birthday this year, Aileen got me the Pathfinder box set, a brilliantly packed box full of manuals, maps, cardboard, and a lovely-looking set of dice – a full complement of those required for roleplaying, in fact. Although reasonable looking, they felt a little light, and didn’t roll very much when cast into the box lid. My very first rolls produced three ones in a row on the D20, followed by a two. The D6 then rolled two ones in a row. I can’t speak for the other dice, as I immediately re-bagged them, and hid them at the very back of our gaming shelf, never to be spoken of again. The very next day, I bought a replacement set at the gaming store (after spending close to half an hour testing and rolling various sets at the counter, obviously).