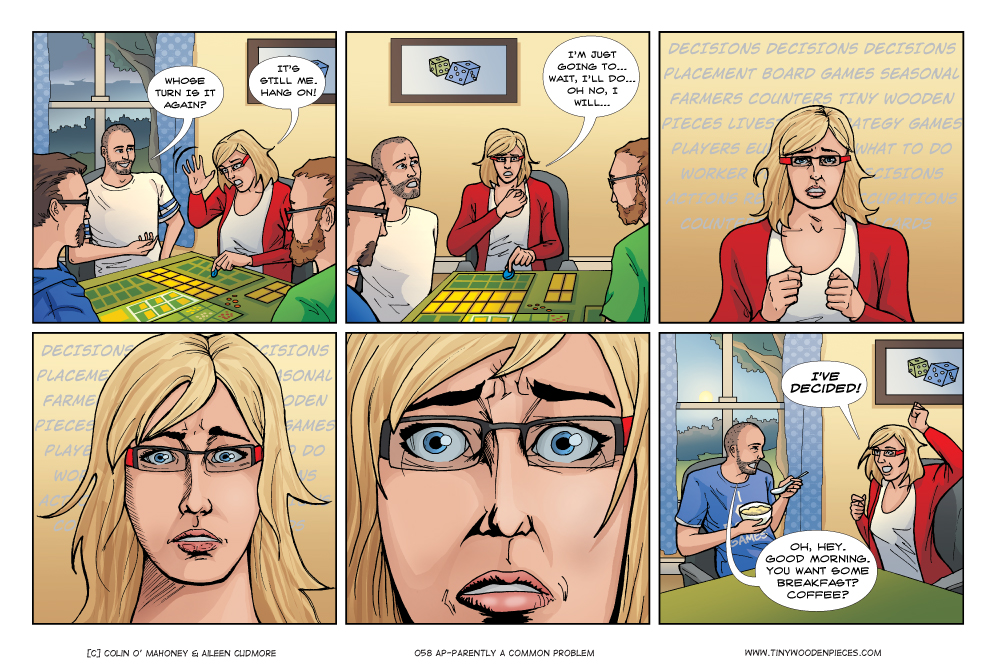 We don’t yet own Agricola, which is the game being played in today’s comic. The strip being more about a condition encountered in people playing games of a certain, broad type, and having only six panels to play with, we thought it okay to sub in a game we have no direct experience of, as a form of shorthand. A panel-bound form of poetic license, if you will.

I mentioned a few weeks ago we were looking for some games that would explore different play styles – less player conflict, more interesting themes, which means Agricola has begun to hover around the edges of our radar, and threatens to take root in our wishlist. The game ranks no. 6 on Board Game Geek, but a top 10 listing no longer carries the weight it once did for me. After a few years of board gaming I see the rankings differently, and use a number of different sites to help judge my interest in a game, and whether or not I should consider it.

When we were new(er) to the hobby, the top 10 on Board Game Geek seemed a pantheon of must-haves, an assembled list of the Titans of gaming, lining up in convenient order to be purchased and enjoyed. But obviously there is more to it than that. Picking a game from such a list now seems equivalent to going to Amazon and buying the no. 1 selling book (currently a guide to eating in a manner that would allow me to “get the glow“) because obviously this must be the best book. Which would be ridiculous (I glow just fine as it is).

As long as I’ve been aware of the site, Twilight Struggle has been the no. 1 ranked board game on BGG. So, not always having been so enlightened, and treating this list as gospel, we purchased it.

I have never enjoyed playing it. I find it restrictive, and frustrating in the extreme. Every turn seems guided, if not dictated by the hand you are dealt, and the phase of the game. I can never seem to find enough wiggle room to eke out a turn I could actually call my own. The game just rubs me the wrong way. Of course, I’m not suggesting that close to twenty thousand BGG users are wrong. It can’t simply be the cards and luck that determine the outcome of Twilight Struggle. For one, Aileen always wins when we play, which implies something more than luck. So clearly there is something there that I haven’t discovered, or that just refuses to click with me. I keep thinking I will go back to it, give it another chance to deal me a hand to call my own. But there are just so many games to play, and so many more we must buy and then play. And now that I know what to look for, and how to look, I can be more certain of enjoying those games that we do buy. I know the mechanics that interest me, the genres that excite me, the right level of luck and skill, strategy and tactics that will appeal to me. I know the reviewers that share my tastes, and those that don’t. I can tell by watching a play through if the game will interest or bore me. I can judge fairly well if I will be able to find people to play it with who will enjoy it as much as I do. And that last point may be the most important metric of all, for me.