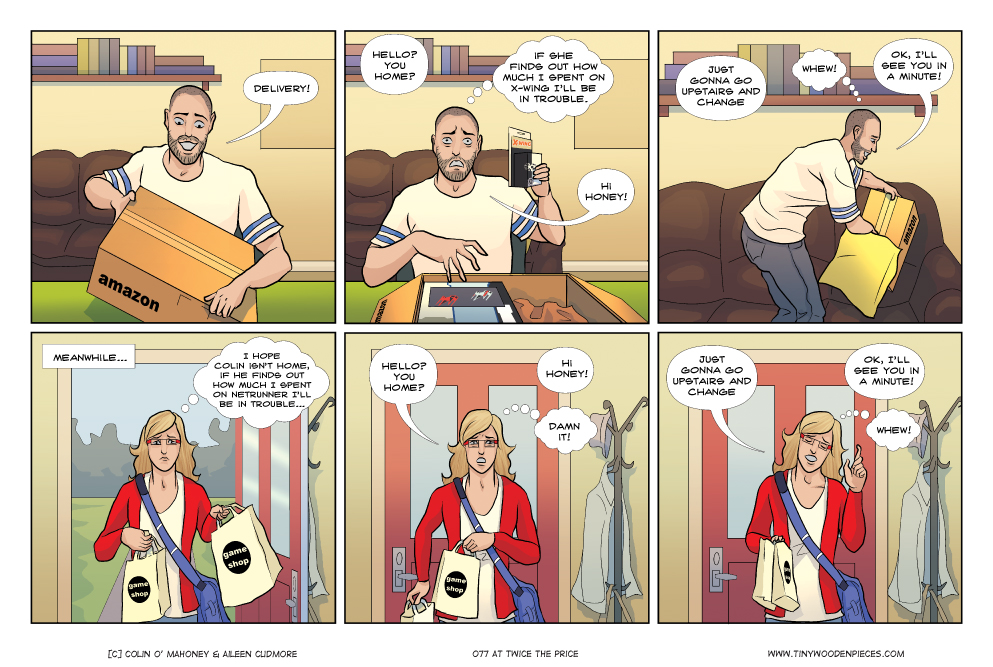 At twice the price

The first three panels in the comic, taken on their own, is a story you hear a lot. In fairness, it’s more joked about than seriously recounted, but it’s a joke I hear too often to not be supported by a strong scaffold of truth.

I don’t have this problem with Aileen, and Aileen doesn’t have this problem with me. Perhaps this is a problem in and of itself, of course. A not-insignificant pile of as yet unplayed games with several Kickstarters on the way would attest to this. That’s beside the point (at least it is in today’s blogpost; the point has, however, been filed away for future source material).

I couldn’t countenance a relationship where my hobbies were a source of tension; where I have to hide spending, or time spent. I spend a huge amount of time writing, editing and lettering comics, and I love it. If there’s something you are so passionate about that it regularly sees you up until the early hours, working on your own, you will know it’s hard to do without support. I don’t think it matters what it is, I am certain that holds true.

I am very big on work-life balance. I’ve held down jobs where the work part has swallowed the life part whole, and ironically, that’s what woke me up to how important getting the balance right is. Work is there to support and sustain life; not the other way around. I no longer consider career advancement to be a means in and of itself. If I’m not coming home healthy and happy, then work isn’t worth it.

I’m prone to rambling in these blog posts, and usually, at this point, I would try and return to the point and wrap it up. I’m not sure I ever had a point, though. I might have orbited one, but I definitely missed the landing. I guess life is too important to waste being unhappy, is my point. You only get one shot at it, so aim for what makes you happy.

Thunderbirds and Epic Card game are the Kickstarters we have on the way, if you were wondering, and we’re giving serious thought to Campaign Trail. Anyone played this or planning on backing it? Any opinions?