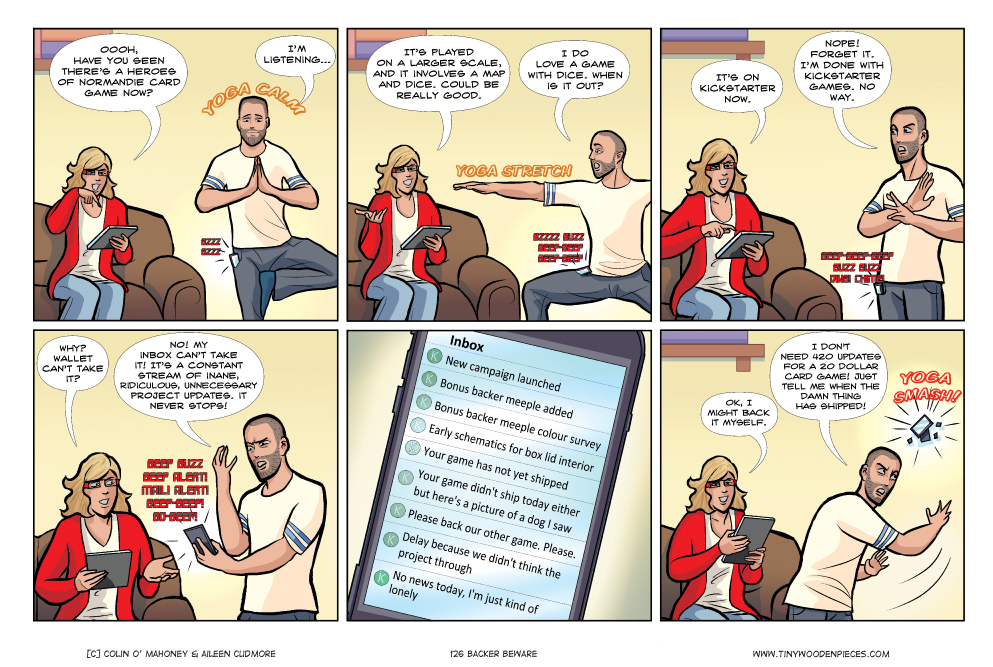 I was just about to do my ‘yoga flame’ as well. It would have been so impressive.

To be clear, this comic is NOT aimed at the ‘Heroes of Normandie’ Kickstarter. I needed a current Kickstarter project for the comic, and this one genuinely piqued my interest. Heroes is a game I’ve always wanted to try, but could never quite figure out how to justify another war game in my collection when the ones I have don’t see enough table time as it is.

The companies and Kickstarters that it is aimed at will remain anonymous, but I am certain that most reading this comic will know exactly what we are talking about. I think even Bob from Marketing would be ashamed at the way in which some companies spam your inbox after you’ve backed their campaign. Sure, if I’ve backed a game that means I’m excited enough to want to hear updates on it, but within reason. A couple of updates about how the project is shaping up, and definitely a shipping notification.

In the handful of Kickstarter projects I have backed, I have seen this handled well, and handled poorly. And worse than that are the companies who take it as permission to add you to a general mailing list/newsletter. That’s infuriating, not to mind legally dubious. A mailing list is a separate opt-in, simple as that. Backing your Kickstarter is not an excuse to email every week long after your project has been delivered. That is not acceptable.

In better Kickstarter news, I backed Moveable Type, a great-looking little card game from an Irish designer. Not only am I supporting local talent, but it means reasonable shipping for once. But I didn’t back it because it was locally produced, I backed it because not only is it a great-looking card game, but it’s a great-looking word-based card game. And we have nowhere near enough word-based games, and I do love words. Unfortunately, by the time the comic is posted, the KS will have ended, but I should have it before Christmas, and if it’s any good you’ll be hearing about it here.

Word games! I am excited.