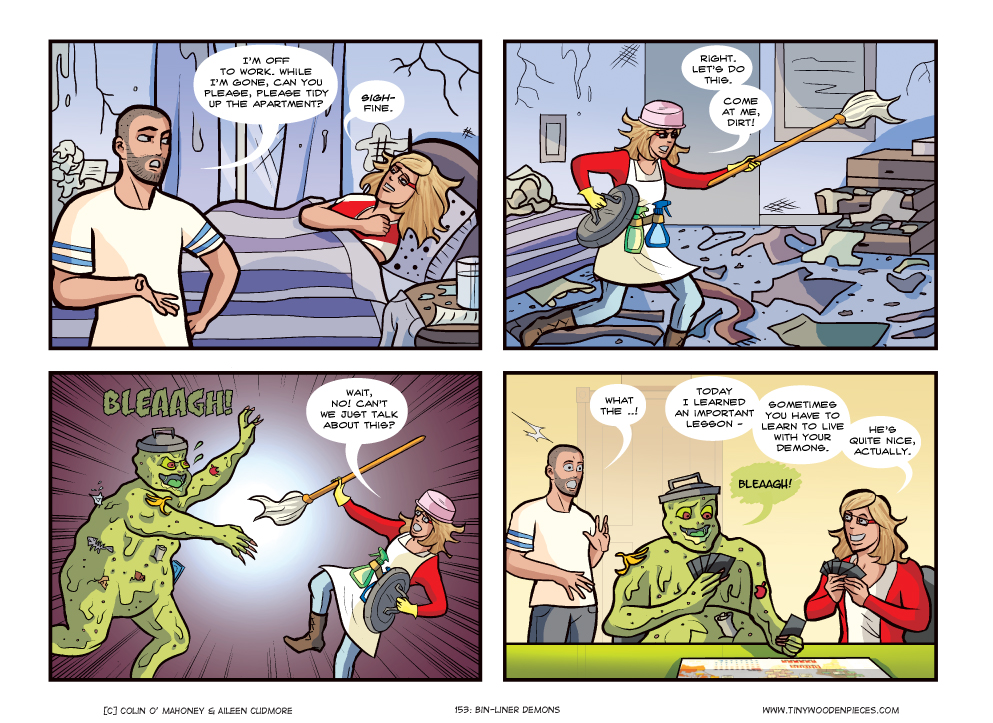 I submitted a pitch to a monster-themed anthology a couple of weeks back. The pitch wasn’t accepted, but I liked the idea enough to boil it down to four panels for inclusion here. I think it has the character and humour to slot into Tiny Wooden Pieces, even if it’s not actually about board games. It does have one in it, though. So there.

Not much gaming going on the last week or so (another reason this week’s comic is off-theme). But we have a game of D ‘n D lined up for the weekend, which I’m very excited about. We’re still new to RPGs, and my goal now is to gather enough experience to run a campaign myself amongst friends.

I’m particularly excited about the idea of building a story, complete with world and characters, which players can interact with, shape, and discover as they play. It’s something that strongly appeals to the writer in me. To start with, I will probably pick an existing campaign to help me learn the ropes, but I’m pretty sure I won’t be able to resist tinkering with it, and adding my own flavour.

Despite not having an opportunity to play any games all week, we still couldn’t resist adding to our collection by backing Oaxaca on Kickstarter. Oaxaca is co-designed by Sarah Reed, a friend, and long-time supporter of the comic. But we didn’t back Oaxaca as a favour, we did so on the strength of her previous game Project Dreamscape, which I have mentioned before as one of our favourite two-player games. It’s a quick, clever, engaging, and beautiful card game that is the perfect weight for its play time.

Oaxaca is similarly beautiful, with arresting and colourful artwork to match its theme. It’s about crafting goods for a market stall – such markets being what the city of Oaxaca is best known for. Mechanically, it’s a mix of dice rolling, engine building, and card selection – which is to say it could have been designed with me as the target market. The KS has already passed its funding goal, and is now ticking off stretch goals, which I’m very happy to say seem to be focused solely on improving the quality of the game. It’s worth checking out, certainly if you like games that lean towards creating and crafting, rather than attacking and destroying (not that there’s anything wrong that).