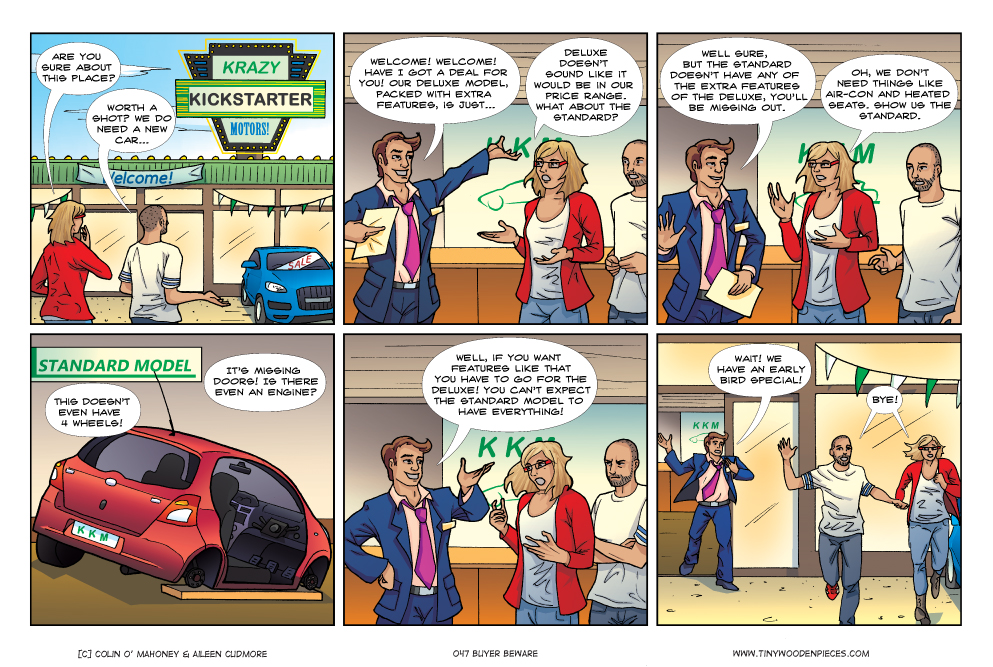 To be clear up front, this comic is not a criticism of Kickstarter. It’s more a pointed satire of certain instances of its use. But I’ll get to that. We don’t often use the comic as such an open criticism, and that is deliberate.

Tiny Wooden Pieces is a celebration of board games, card games, playing games: the whole hobby. We love playing games, and want to shout about this to as many people as possible. It creates something of a tension for us that our comic, which we want to use to bring more humour and fun to board gaming, is not as inclusive as it should be. It is necessarily esoteric, often requiring prior knowledge of particular games, game types, rules, news in the industry, etc. But that’s the comic we chose to make, and we do our best to keep it as open as possible. We have no time for that kind of person who thinks board games should be for serious gamers only. That casual game players, newcomers and dilettantes have no place at the table. We love teaching games. That moment during a game of Pandemic when it clicks with someone that games are more than the long session of Monopoly or Game of Life they had to endure growing up. That games can be clever, challenging, funny, and fun. Above all, fun. That games create stories and memories. Jesse Schell refers to board games as being a form of magic, which is a sentiment I wholeheartedly agree with. He talks about how games can transform lumps of mundane plastic and cardboard into something more than the sum of their parts, how this inanimate collection of objects can make people sweat, laugh, shout and argue.

To steal and extend Jesse Schell’s analogy, a rulebook can be a form of spell book. Reading aloud a collection of ordinary printed words, arranged just so, can transform a collection of cardboard, plastic and paper into a whole world. Can bring things to life to and catalyse a breadth of emotions and experiences amongst players. A slight framework of rules can be an enchantment strong enough to spellbind a table of people for a whole evening. Strong enough that it will be talked about for weeks afterwards.

The rulebook thing could be just me, though. I kind of love reading rulebooks, and am fascinated to see the interplay of structures, mechanics, limitations and clever thinking that goes on behind the scenes. To get a glimpse of the man behind the curtain, and marvel at his genius.

I have, as you may have gathered, gone wildly off-topic here. I got so genuinely worked up about the magic of games, about how we should all be standing on rooftops, proclaiming to our neighbours the joys of dice and miniatures and explaining to the police later that day that someone on the internet told you to do it and you wouldn’t usually shout out anything, let alone climb on your roof, that I forgot what I was here to talk about.

Back to the point, then, so I can wrap things up. I’m sure you all have jobs to attend to, games to play, or cases to plead to the judge regarding public disorder offences and possible trespass of rooftops.

So here’s the thing I hate about some board game Kickstarters. This thing I dislike so much it prompted our usual Friday morning light entertainment offering to turn into a satire (we hope you didn’t mind). It is the offering of a deluxe version alongside a standard version. Now, sometimes when this is done it’s fine. I do not always have a problem with this. If a publisher wants to offer upgraded miniatures, an embossed game box, any kind of aesthetic upgrade at all, this is perfectly fine with me.

The problem is when you start adding extra gameplay features. More map tiles, different enemies, new scenarios, and packaging. Offered not as an expansion to be sold separately, but as a ‘deluxe’ version of the very game you are offering on your Kickstarter, then you lose my interest, never mind my money. You are showing me a game for $50 and saying ‘this is kind of the game we are offering, but if you really want the game, pay me $75.’ I feel if I back the standard version I am not actually getting the full game.

The good news is, of course, that there are so many Kickstarters doing it right, that if I want to back an exciting looking game that will give me great value for money, I will have so many options. Kickstarter has been so good for our hobby in so many ways. There are so many unique and brilliant games that would not have gotten made in any other way. They have helped raise the profile of the hobby and open the gates to so many new players. These are all brilliant things, and I hope it continues for a long time to come.

Now come down from that rooftop before your mother catches you.