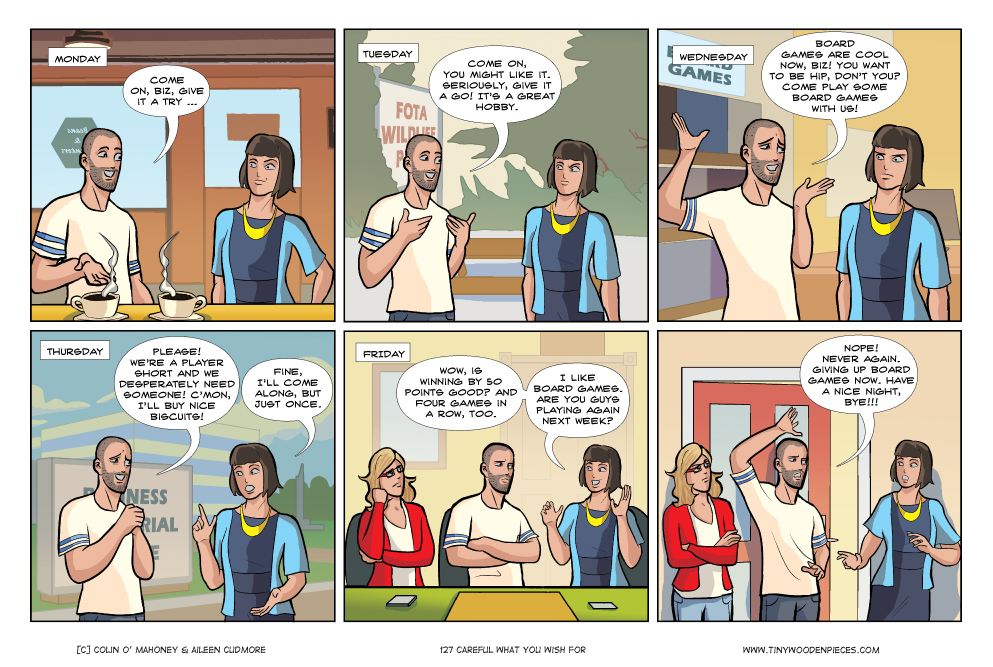 Firstly, for those who care about such things (and I believe our audience numbers a few of you) there is another great value word game on KS right now. This one seems to have an extraordinarily simple rule set, so much so that I was put off a little at first, but it’s possible it is one of those games that works well, not in spite of, but because of, a simple rule set. At only 23 dollars including shipping, it’s quite likely I will find out. And the KS is still live as this comic is posted.

Halloween came and went with little in the way of opportunity for playing seasonal games. We did manage a solitary game of Werewolf (I won, and must say the villagers were delightfully tasty), but Mysterium, or Ghost Stories, or Dead of Winter all failed to haunt our gaming group with their presence.

Still, if Disney movies have taught me anything, it’s that Halloween was, and still is, in our hearts all along, and so can be celebrated right up to Christmas, at which point the carved pumpkins are likely to be no more than orange mushy puddles by your doorstep, and should be removed. The point being, spooky games are good all year round, so we shall try our best to get some in at a later date. In fact, we have been meaning to get back to Fiasco, and there are plenty of appropriately themed scenarios for a night of horror gaming. Our first game was an ordinary crime-themed bloodbath, so now we want to try a bloodbath of a more supernatural nature – zombies, monsters, politicians, accountants etc.

I have an X-Wing tournament this weekend, but after that there is no more competitive X-Wing (at least locally) until the new year, so I will be playing a broader spectrum of games in general. Having said that, it is also looking more and more likely that GW’s Blood Bowl will release this month, which means I will just be swapping an X-Wing obsession for a Blood Bowl obsession … Anyone else as excited about Blood Bowl as I am? (on a scale of 1 to pretty darn excited I would rate myself as being ‘pretty darn excited’)