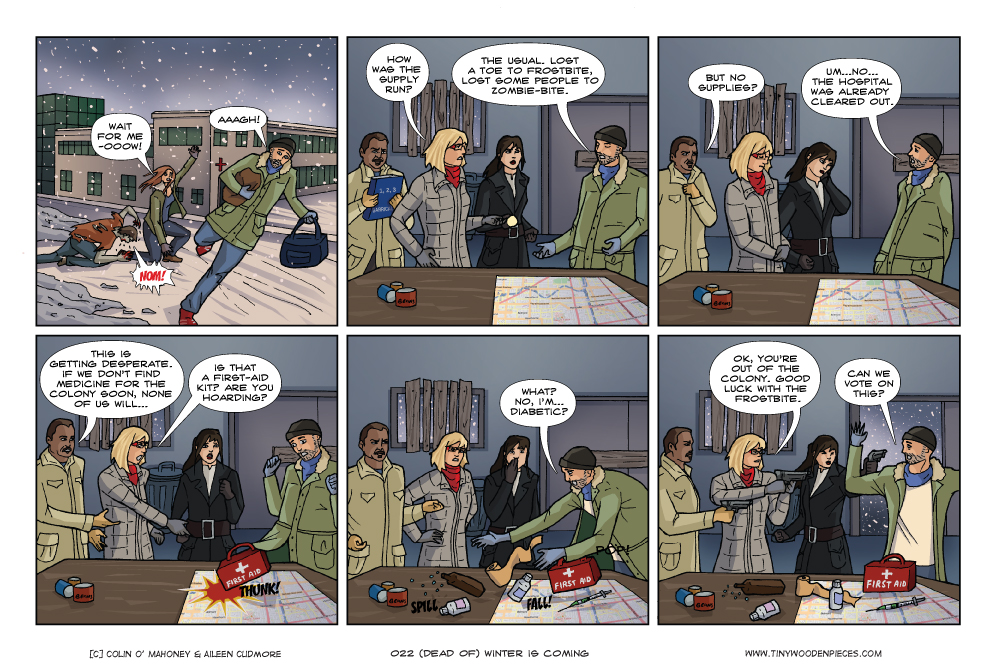 She arrived at the colony early on, when everyone was still happy to have another pair of hands to help out, and less worried about another mouth to feed. She was a doctor, of course, which helped a lot. So much so that no-one minded that she brought baggage. But I mean, she was a doctor, so even if her companion was sick, that was fine. She could help out with everyone. I mean, who wouldn’t want a doctor around in the middle of the zombie apocalypse, in the dead of winter?

If she demanded everyone kill more zombies so she would have samples to work on, to help cure the zombie plague? Sure, I mean, no-one was going to say no to that, to some small sliver of hope that there might be a cure, a way out of hell. In those days, hope was worth more than food, or even medicine. In those days they didn’t know how hungry they could get.

It was when her companion started to get really sick, to blister and bleed, that was the sign they should have seen. Not the bleeding, or even the pus. But the fact that she decided to kick him out, to simply throw him to the wolves rather than keep trying to save him. But they all voted, so maybe they didn’t want to think too hard about what they had been complicit in. Maybe they needed to keep moving. It was easier to think about the food shortages, the barricades that needed to be erected to keep the undead out. What was one sacrifice compared to that? If the barricades weren’t maintained, no-one would survive. Keep moving, keep working, and not think about how bad things were getting.

If their humanity was being eroded, like toes to frostbite, well, that wasn’t the only sacrifice they would have to make. And she was looking for a cure, right? I mean, they all saw her, tinkering in the shed. They didn’t understand it, but they knew science and medicine when they saw it being practiced.

Maybe those were all good enough reasons. Maybe not. Maybe they only had themselves to blame. Maybe not.

I mean, they weren’t entirely wrong. She was experimenting. It just wasn’t the zombies that were the subject of the experiment. And when she told them all what she had done, that she had made a smarter zombie, a better zombie, and once they were all infected, they would have just enough of their minds left to obey her completely? Well, she had already poisoned the colony’s water supply. The deed was done, and blame was yesterday’s problem. They had kept the zombies outside the door, sure. They just let something far, far worse in, and now it was too late. The colony was lost. Everything was lost. Now there was just hunger.

That was our first playthrough of Dead of Winter. That is exactly how it played out, how the betrayer crept in and ended it for everyone. I’m not filling in blanks, joining dots, making parts up. That’s the game we played, that’s the story we told.

Who was to blame really was up for question. I’m not sure our game of the year is anymore though.