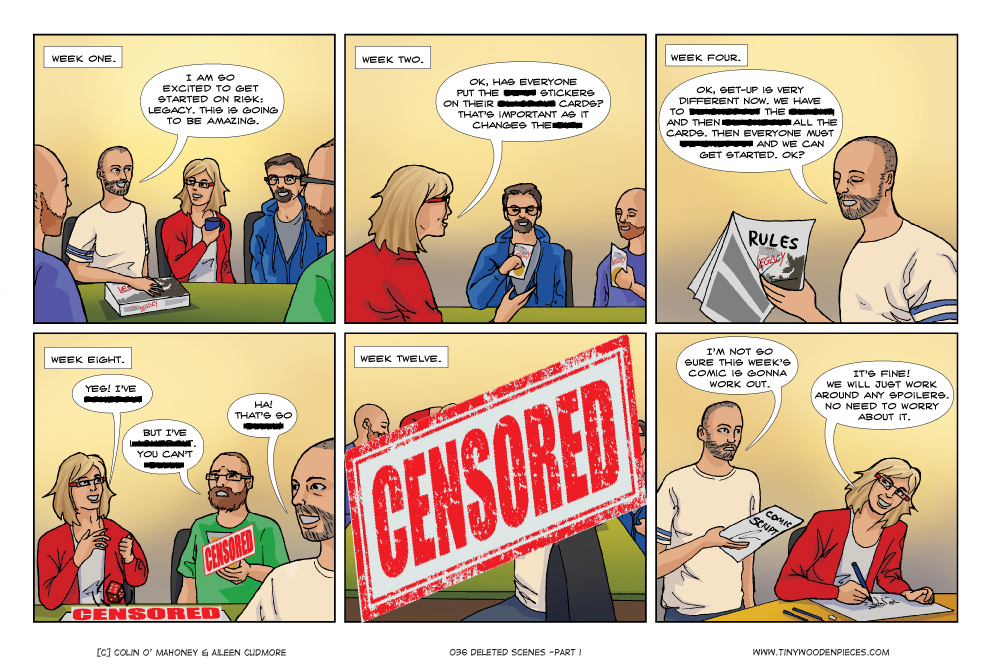 As mentioned last week, for the last two comics of the year, we are presenting something a little different. As the box lid is placed on 2014 and a new year comes down from the shelf, we have two weeks of the comics that could never be. Valiant attempts doomed to failure; strips best left on the drawing table. We present to you Tiny Wooden Pieces Season One Deleted Scenes.

Part Two follows next week, then we will be taking a break for one week to re-acquaint ourselves with the fine traditions of stuffing a turkey, then stuffing ourselves with the aforementioned table fowl. There will also be trees, whiskey, old friends, family, and some well-needed time off. We will be posting some content to the site over the Christmas period, but normal service will resume Friday 2nd of January.

Over the past couple of weeks we have managed to gather quite a few new games, including Machi Koro, Escape: Curse of the Temple, Tokaido and Sherlock Holmes: Consulting Detective (not new-new, but new-to-us). Things being as they are in the run up to Christmas, we’re not going to have too many opportunities to get dice rolling on any of these just yet. So Christmas already has a busy schedule of exciting new gaming for us. This definitely takes the sting out of not being able to get any of our current most wanted games before Christmas: Imperial Assault, XCOM and Alchemists.

With so much already unplayed, we won’t be left wanting in the meantime. In fact, it actually feels refreshing to be focused on playing games over Christmas, and not concerned with which releases make our Christmas list. I’m looking forward to nothing more than staying indoors and playing games for the holidays.

Not that I wouldn’t wrestle a Wookie to get my hands on a copy of Imperial Assault, obviously.