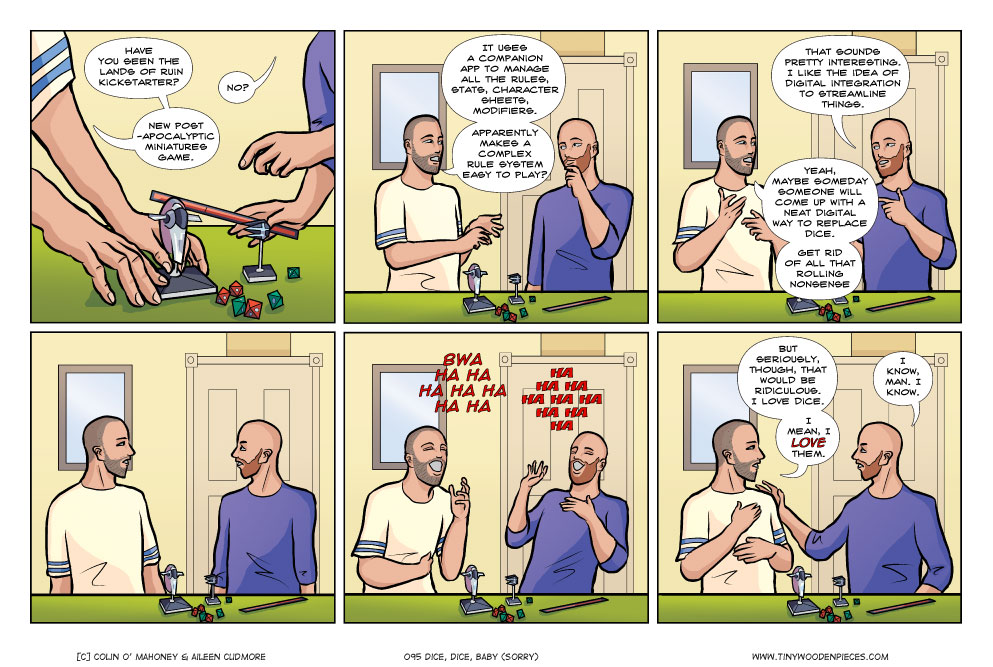 You gotta roll with it

As previously illustrated, Aileen is a cardboard sniffer. There is no element of unboxing a new game that she loves more than the smell of it. If my own board game fetish were to be thus labelled, I’d be a dice fondler. As soon a new box is opened I’m rummaging around the cardboard and the plastic looking for dice, like some kind of hipster hobo, for whom dumpster diving for food is too ‘last year’. I can’t wait to get them into my hands and feel the weight, the quality; hoping for a good heft, and a satisfying roll. There is of course, an extra thrill of pleasure in custom dice. Unique faces, fascinating symbols, strange new purposes and uses.

I often spend time here proselytising about the wonderful social nature of board games. But their other great appeal is their tactile nature. Picking up a piece and moving it around. Holding a hand of cards. Amassing counters and tokens. Placing a lovingly crafted wooden meeple to claim a territory or declare an action. That wonderful ‘thunk’ as a good hand of dice hits the table rolling. The artwork, the atmosphere it creates. It’s all so tangible, helping you to connect with the game. To turn a box of cardboard and plastic and a dull book of rules into an experience that really engages you.

Thankfully Lands of Ruin doesn’t do away with dice, which as far as I’m concerned would put it on the wrong end of the age-old baby/bathwater equation. What they do claim to do is streamline a complex rule set to make it easily and instantly playable. The companion app will crunch the numbers, and allow for complex mechanics and detailed tables to be used without the need for constant rulebook reference. At least that’s the promise of the Kickstarter.

The thing I find the most interesting about their system is the ‘AI’ element that populates the battlefield. This is at once the game’s most innovative mechanism, and also the best argument for the digital integration they are putting on the table. As opposing players skirmish, other factions will move about the battlefield. Infected dead and rusting, but still deadly, war machines and robots will get in everyone’s way and turn a straightforward skirmish into an altogether more interesting encounter. It’s a battlefield that becomes a real environment, and that’s an exciting idea.

I’m less enthusiastic about the idea of ‘hiding’ the complexity of the rule system, though. I want to know what is modifying my dice roll. If the game has an interesting rule set, and a lot of determining factors in game play, I want to read about them. I want to use them to plan, to build squads. If the depth of the game is hidden from me, I feel it won’t have the same ‘crunch’ as other wargames, and might even lead to not being able to engage with the game on the same level as I so lovingly described above. Of course, at this stage, that’s all just speculation on my part. Without playing the game, I don’t know how much of this will hold up, for better or for worse.

There is a lot to like here though, and I’m seriously considering pledging at just the ‘digital’ level, which gives me access to the app; I can then use existing miniatures to play the game (Necromunda, I’m looking at you). And I have to say, I do admire 6EX Games for having that pledge level. It translates to an affordable buy-in, which might be the most important deciding factor of all for a new game in the already crowded miniatures game market.

Anyone else been looking at this? What do people think about a system like this? Would it make a game a more or less enjoyable experience?