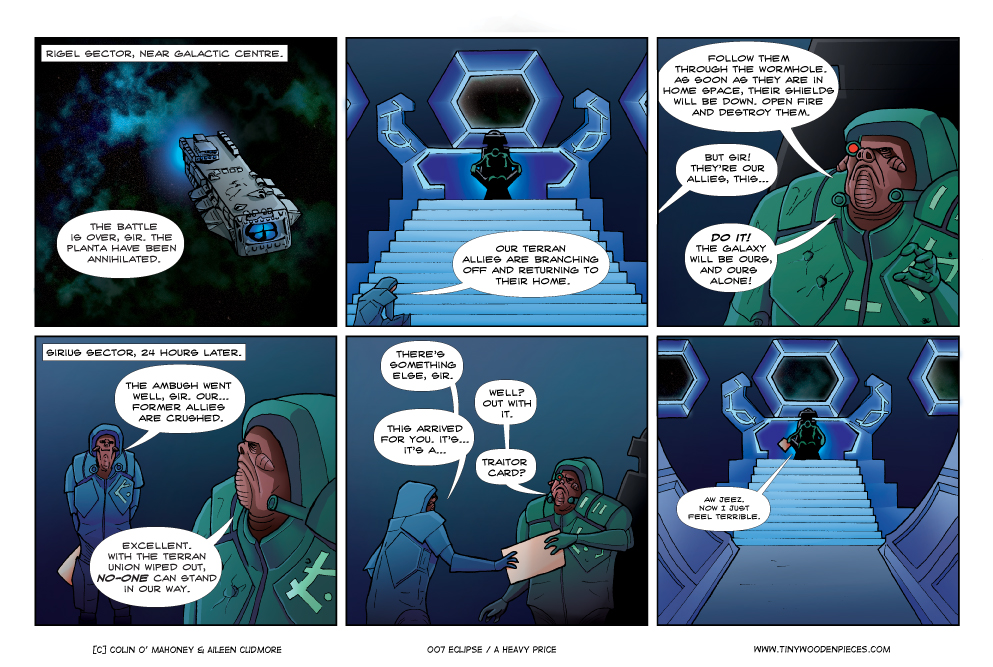 Eclipse has the single darkest, most horrible mechanic of any board game I have played. Not the traitor card, though. Aside from being kind of hilarious, that is actually a great mechanic. Eclipse handles alliances very well, making them a functioning mechanic in-game, not just a hand-shake agreement between players. There are tangible benefits to being in an alliance (diplomatic relations, as the rules refer to it) with another player. Of course, it also means you can’t pass through their territory, not unless you want to earn the stamp of a betrayer. Attaching a stigma to treachery is thematically very sound, and backing it up with minus victory points works very well.

The whole game, in fact, just works really, really well. For a large-scale science fiction 4X game (eXplore, eXpand, eXploit, eXterminate) on a galactic scale that incorporate research, several classes of ships and weapons, multiple routes to victory and a massive amount of player choice, the game plays far more smoothly, and quickly, than it has any right to. On our first few playthroughs I found myself checking the rules near-constantly. Not because I needed to clarify any complexity, but because we were playing it so quickly, and with such ease, that I kept thinking we were doing it wrong, or missing something fundamental that would bog things down to the pace I had expected the game to play at.

Another master stroke at play in Eclipse is the nine-turn limit to the game. Having a turn limit is not unusual, of course, but in a game of Eclipse, nine turns is when you feel you are just getting started, beginning to get your ships fully kitted to kill, having explored a reasonable amount of space around you. The game ends while it is still exciting; there is no winding down in the last turn or so, or watching another player race unassailably ahead to victory knowing you can’t catch up. After nine turns you feel you’re just getting your teeth into it, and after a few games I saw the brilliance in that.

That mechanic, by the way, the one I mentioned at the top, is how you take over another player’s system. After you’ve fought any enemy fighters or defences he may have in place, you can’t immediately take control of his system and start placing your own population down. First, you must eliminate his population. Not replace with your own: eliminate. Which is achieved by firing your cannons at his planets until there are no more lifeforms left to fire your cannons at. In fact, you can even spend a turn researching neutron bombs. Neutron bombs are no good in a firefight, they serve only one purpose. The automatic elimination of any opposing players’ population cubes in a system you’ve just conquered. Genocide, in a word. It’s a fearsomely dark turn that drives home what’s really happening in this vast, interstellar conflict of cubes and tokens across hexes of stars.

From physics to space opera

Eclipse was one of the biggest releases of 2012 and proved so popular that it rapidly rose in to the top 10 of Board Game Geek. Which made me wonder, what kind of person could have created such a powerful game?

It turns out that the designer, Touko Tahkokallio, actually­ has a background in theoretical physics. Which obviously means that he is super-clever and clearly has the right type of brain to devise elegant and thrilling games.

Tahkokallio even went as far as pursuing a post doc in Canada, but gave it all up to follow his true passion in games design. His first three games were published by Onni Games, a board games company he established with a couple of friends back in Finland. Although his new career simply began as a hobby, the success of Eclipse proves that the gamble has certainly paid off. Such innovation and enthusiasm from new games designers is inspiring, and can only be good for the board games world.