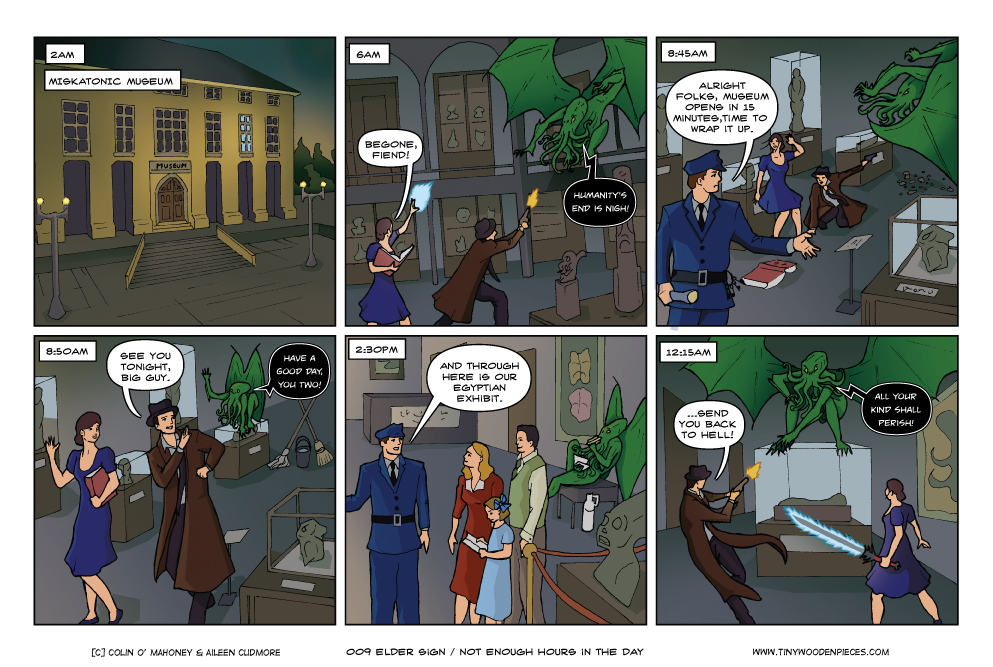 Sometimes comics are difficult to write; with ideas forming only after hours of play and conversation on a game. But sometimes the ideas are easier to come by. Sometimes they are right there in the rulebook, waving a flag and jumping off the page. For those unfamiliar with the game, there is a clock mechanic (a really good one) in Elder Sign. It gives a great sense of pace and impending Lovecraftian doom to the game. Every time the clock strikes midnight, bad things happen. But to quote the rulebook:

Each time the clock reaches “XII”, midnight strikes. There is no “noon” in Elder Sign, as the investigators have to sleep sometime and leave the museum during its business hours.

Elder Sign’s big brother Arkham Horror is a fairly divisive game. It’s become a sort of representation of the best, or worst (depending on your leanings), of Ameritrash games.

As can be expected with any Fantasy Flight release, the components are all top notch quality, packed with evocative artwork and flavour text. The box is as heavy in theme as it is in cardboard (and it is packed with cardboard). Detractors will reference its over-long playing time, randomness, and system of rules that doesn’t quite manage to click together as smoothly as they should.  The game works fine, it can just feel … sprawling, rather than tightly knit. (Here I should note that obviously our comic artwork this week is designed to emulate the magnificent art of the Elder Sign box and rulebook, in particular Anders Finer.)

Elder Sign on the other hand is the dice-rolling, quick-playing, stripped-down, streamlined version of Arkham Horror. Although it still feels like it has far more components than it needs, Elder Sign is a wonderfully simple system that replaces every paragraph in the Arkham rulebook with “just roll some dice at it”. Fighting a monster? Roll some dice. Completing a task? Shake them bones. Negative effect in play? Spill fewer cubes on the table. Have an item that helps you? Add another decision-based rolling device to the pool. Getting an item in the lobby? Well I’ve run out of dice analogies, so tough luck.

I’ve had a lot of fun playing both Arkham and Elder Sign. I find Arkham doesn’t do enough to allow the players to really co-operate, and it can certainly run on. On the flip-side, Elder Sign can feel a little one-dimensional, and sometime can be so easy it feels like a walk through the museum during those mysterious missing twelve hours, and not at night when the Elder Gods come out to play.

And look – “flip-side”.  I just used a coin analogy. I did say I was out of dice jokes.

Phew, was under a bit of pressure to get the comic out this week. I would have loved to have spent a bit of more time on it. Elder Sign has such a wonderfully strong theme and it offers such a rich world to delve in to. With so many Ancient Ones available to fight, a different one is guaranteed to crop up with each game.

But what I really enjoyed were the Investigators. They are all fun, often ridiculous characters that help to draw you deeper into the game. From Monterey Jack, the slightly crazed archaeologist, to Gloria Goldberg, the psychically sensitive author, there is something there to suit everybody.