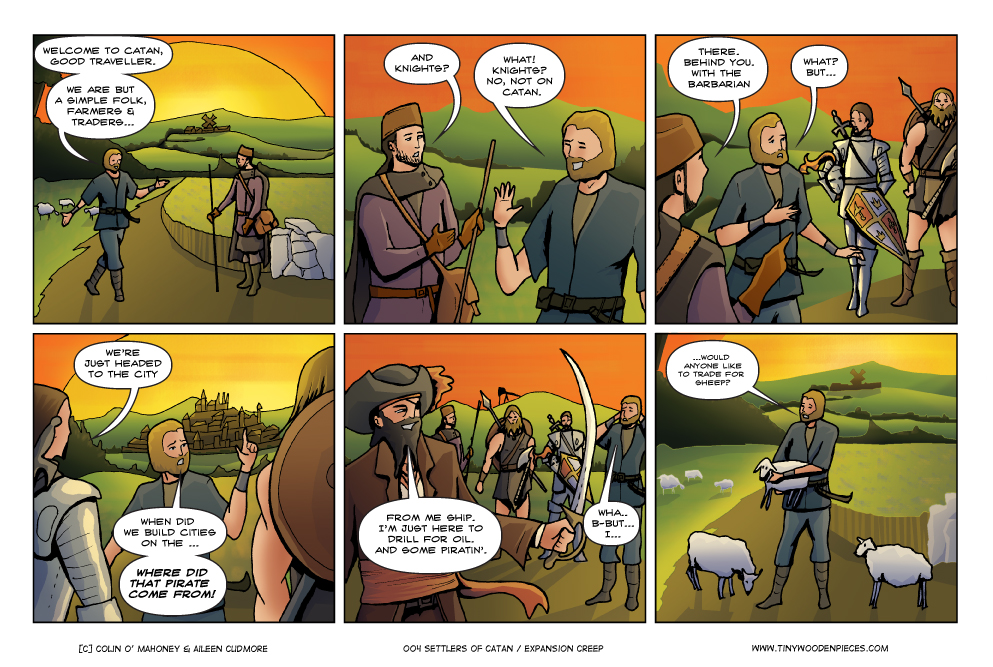 The iconic isle of Catan

I don’t think this will be our last visit to the island of Catan. Like it or not, the island is engrained forever in gaming culture. 19 years later and it’s still the iconic poster child for the board game hobby. Many now see it as dated, surpassed and improved upon enough to be made redundant, but Catan remains, for me, an elegant, well-crafted and almost-always enjoyable game. It’s not one that’s brought to the table very often at a games night, but as a gateway game – something to show people that board games mean more than just Monopoly – Catan has always served well.

The island of Catan sits wonderfully on the midway point of the map between co-operative and competitive, insisting on player interaction to turn the wheels of the game. On Catan, you don’t trample your neighbours on the road to victory, you trade with them. You can’t carve out a capitalistic swathe through the island, hoarding resources, waiting for wheat’s stock to rise so you can crown yourself the wheaten king atop your throne of cereal. The game doesn’t reward that kind of play. Catan is a relaxing evening of chatting, dice-rolling and sheep. It’s not a perfect game, mind you. You can get buffeted about by bad luck, and in a four player game a fourth player, particularly an inexperienced one, can get squeezed out of contention early in the game, with no real options to expand.

Since I’ve started board gaming seriously, I’ve constantly tried to bring the hobby home with me, twisting arms and optimistically under-selling playing times to get my family to the table:

Of all the games I’ve brought home to my parents, like a teenager anxiously presenting a prospective partner for inspection and approval, Catan has been the best received. The evening we spent around the table really managed to engage everyone there, I didn’t have to poke or prod to get people into it, and it would be an easy sell to get my family to play it again.

Board games have always been about spending time with people for me, family included. For this reason alone, Settlers will always remain welcome at my table.

The continued expansion of Catan

The Settlers of Catan is the original base game in a series that revolves around the bountiful island of Catan. In the game, players vie for control of the island by quickly building settlements, cities, and roads. But they can only do so based on the fickle resources that the island produces – lumber, ore, grain, brick, and, of course, wool. Scarcity of these resources forces players to trade and barter with each other. This player interaction is not only central to the game but is key to the enduring appeal and success of Catan. And this success had led to the creation of many, many expansions.

There are four official expansions to the base game, all of which have their own extensions for 5-6 players. Then there are several variants and scenarios, as well as smaller card and dice games. Finally, there are a whole bunch of Catan spin-offs and stand-alone editions, not to mention the hugely popular Star Trek Catan in which, rather wonderfully, the robber is transformed into a Klingon ship.

The Catan expansions and variants opens the original game up to a wider world, full of new characters and new challenges. They offer the opportunity to tailor the game to suit different needs of a playing group, and present experienced players with new situations to explore. All this while still remaining very much a Catan game.

But expansions are not just for Catan. Nearly every game that is released these days is quickly followed by an expansion. So rest assured, if you are addicted to a game, then there is inevitably something more waiting just around the corner…