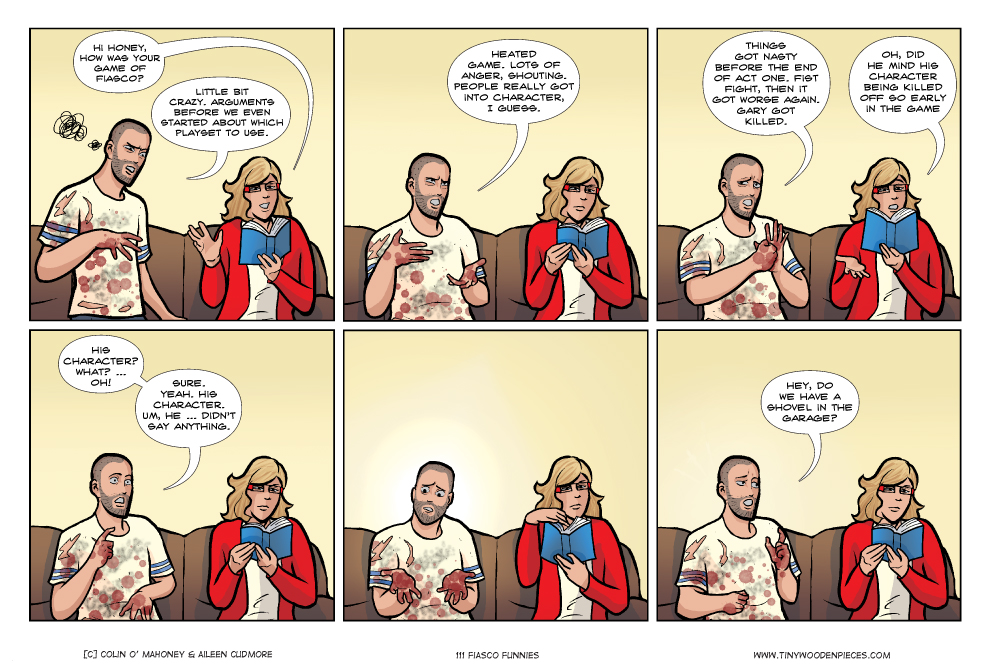 Things started when the body was found. In the isolated darkness of McMurdo Ice Station, paranoia and dark ulterior motives quickly took hold: one kidnapping, one attempted seduction, one burglary, several assaults, and a penguin-worshipping death cult later, we all found ourselves in the alcohol-soaked confines of the local bar. We were joined by some dynamite, a mysterious package of toxic waste, a lighter, and some very dark, murderous intentions.

That was how our first game of Fiasco played out, and if that doesn’t recommend it then I don’t know what else to say. On the other hand, it’s probably not for everyone, and you do need to have the right group. I talked a little about it last week, and you can see details here, but in short it is a one-night RPG that runs without a Games Master and simulates a crime caper in the vein of the Coen Brothers, or anything else similarly twisted, anarchic, and ultimately violent. Needless to say, it’s a game with mature themes. And not just mature themes that you’ll be sniggering at on cards, but ones you will have to act out with and in front of your friends.

We picked up Fiasco as a gateway to RPGs. The problem we had with getting into RPGs was that neither of us has experience enough to run a game, so we needed one that didn’t rely on such previous experience. Fiasco circumvents the needs for a DM, although you do still need one player willing to keep the group on track, and keep the game moving in the right direction. In getting by without a DM it uses a set of simple mechanics, albeit non-intuitive ones, that can be hard to grasp. After a couple of read-throughs of the rules, we still needed to see the game being played for parts of it to click (thanks to commenter Zorblag last week for pointing us towards that video). Even then, it was really only in the second act of the game that everyone in the group really understood the mechanics underneath the wonderfully chaotic surface of our caper, and how we needed to play with them in mind.

Having said that, we managed well enough to craft an utterly memorable final five scenes. These all took place in “The Lonely Inuit” (the local bar) within the space of a few deliciously tense, slow-motion seconds, when a naked doomsday cultist burst in holding a stick of dynamite and a lighter, but was knocked out by a flying pint glass (whose owner stumbled to the ground, tripping over another character clinging to his leg in fear), landing the lighter and dynamite at the feet of another unsuspecting character. Seizing the opportunity (and explosives), she exited the bar, throwing the lit dynamite back in, delighted at the opportunity to simultaneously wipe out and frame everyone else in the bar.

It was only after we had finished playing that we realised we never even got to find out how that first body got there, or who was responsible.