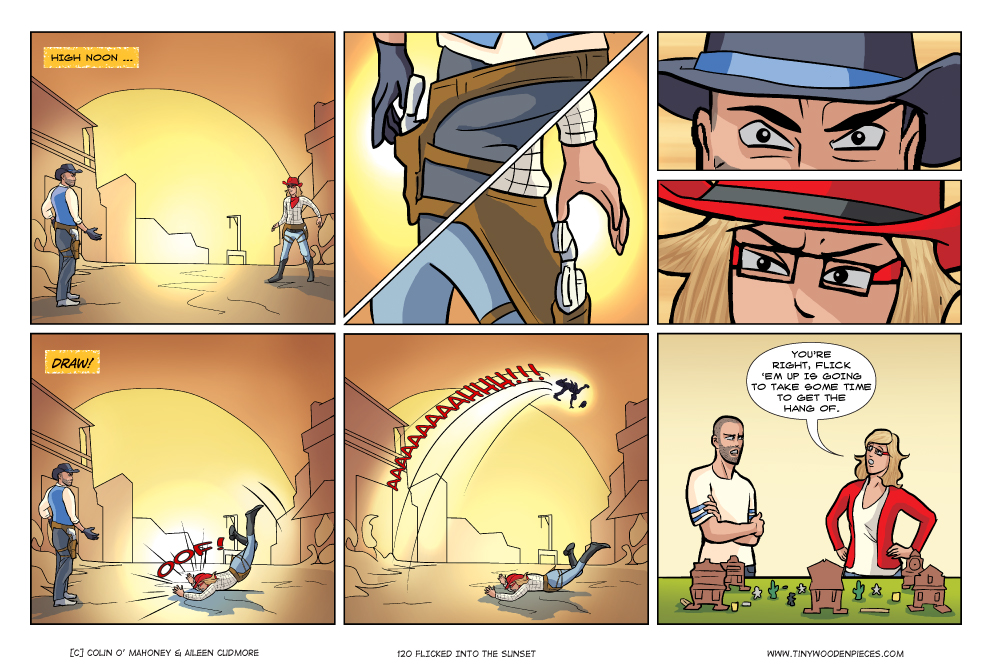 This week we join our friends and comic colleagues over at Semi Co-op in celebrating the wonderfully silly Flick ‘em Up! (this was accidental, not planned, but probably bound to happen eventually. Anyway, you should check their comic out, it’s great).

Flick ‘em Up! is technically a Wild West miniatures game. But it is also miniatures game where the movement and combat are resolved by flicking movement and bullet discs around the table top, trying to knock over your opponent’s meeples. Stetson-wearing meeples, obviously.

Despite the clearly ridiculous nature of it, it does also have some depth. There is definitely thinking required in terms of how you go about each of the 10 scenarios, in which order you activate you cowboys. I can see it having plenty of replay value past the initial novelty factor. And the box is packed with scenery too, so it looks amazing on the table. It’s definitely a game we will be playing quite a bit of in the coming weeks, and it’s most definitely not an attempt on my part to surreptitiously get Aileen more into miniatures games. Nope, for sure that’s not what I’m trying.

Quick, look over here, it’s a collection of quotes from our last game of Flick ‘em Up! that highlights the hilarities, hijinks and high noon antics of the game:

“Where did that disc go?”

“HAHAHAHA I can’t believe you missed from that distance”

“I swear this isn’t just a kid’s toy we bought, it’s an actual board game”

“I think Pete just shot himself in the foot”

(No animals were actually harmed in the making of this comic or in the playing of Flick ‘em Up!)