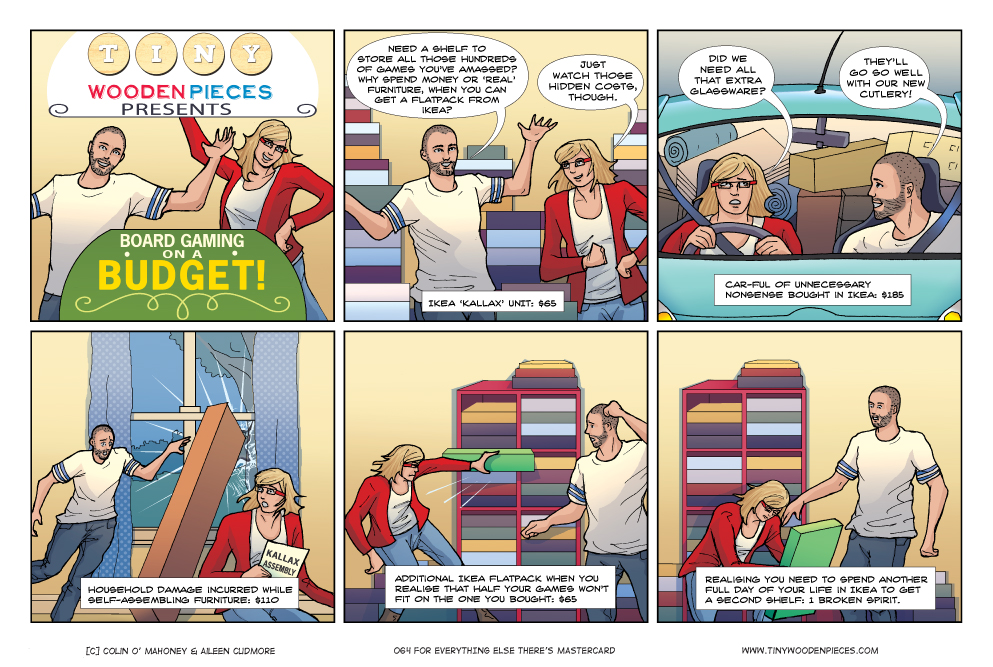 Board gaming on a budget

Today’s comic is one of those which is told with neither exaggeration nor embellishment. While we do love our bright red Kallax shelving unit, it did end up costing us quite a bit more than we had anticipated, for all of the reasons detailed above, broken window and all.

As we get deeper and deeper into the hobby of board gaming, industry awards become more exciting. Each year we become more familiar with more games, and keep up better with new releases. The Dice Tower just announced their award for 2014 across 14 categories. Of the 12 winning games, we have played 7, with an 8th winner coming to our table within the month. That’s considerably up from having played 0 of the 11 winners from 2013 (even since they were announced we haven’t managed to play any.)

Obviously, it’s more exciting to have played more of the winners and nominees: it makes you feel like you have a horse in the race; a favourite game to root for. And even better than having simply played a lot of the winners, I really love all of them, and would have chosen similarly myself. Taking game of the year, along with best co-op and theming, is Dead of Winter. We really love Dead of Winter, and were delighted to see it win. I have mentioned before I am beginning to find it wearing thin mechanically, but Dead of Winter is built on the theme and story, not mechanics, and this is a foundation that keeps it standing strong, and ensures it remains a unique, and unparalleled experience. Even if zombies games are not your thing, I strongly suggest at least giving it a try.

Another stand-out winner was Star Realms, a card game we have been re-visiting quite a bit recently. It’s inexpensive, clever and strikes an inviting balance of quick playing time and a nice amount of depth. It’s a quicker, leaner Dominion with exploding space ships, and more than deserved its win for best two player game, and best small publisher for White Wizard Games.

I was impressed enough with Star Realms that backing White Wizard’s next card game on Kickstarter was a no-brainer. It’s again, a self-contained card game that seems to seek that magic (no pun intended) balance of a quick playing time without sacrificing depth and replayability. It’s only their second-ever game, but with more than 10,000 backers and a half a million dollars of funding for the game, it looks like White Wizard are soon going to outgrow the tag of ‘small’ publisher.