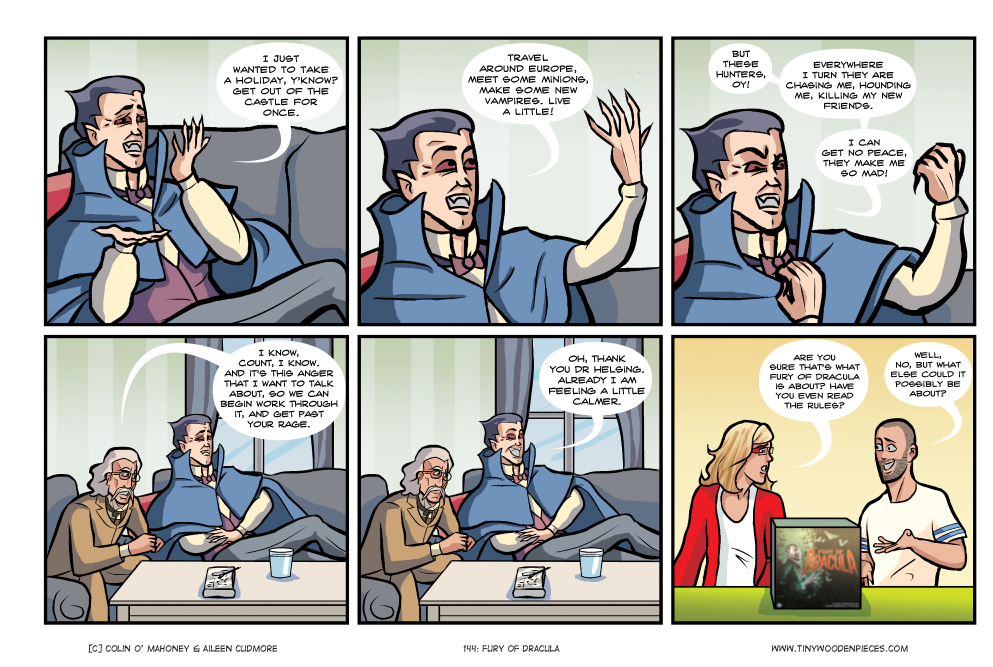 This week’s comic barely got made on time, and as this is becoming an ongoing problem for us, we had to look at making some changes. We are still committed to making the comic, and to delivering it weekly. Tiny Wooden Pieces means too much to both of us, and we love the creative outlet it allows us. Sticking with the same comic and the same schedule just leaves the format.

Starting next week, we will be dropping the panel count down to four. Four panels is really the archetype for a humour strip, and the unequalled Peanuts was the template for that. There is a long tradition since then of four panel strips (three is popular as well, we might dip into that), so there is no reason we shouldn’t be able to produce the same quality of content with this new format. Besides which, I am actually quite excited to get to play in the same sandbox as so many great comics, and see what I can do with it.

And also Aileen is excited to have more than 35 minutes total spare time in a given week. We hope you all stick with us, and can appreciate our reasons for the change.

We played our very first game of ‘Fury of Dracula’ last week. Although I was disappointed to learn that it does not actually play as depicted this week’s comic, one playthrough was enough to make me very glad that we managed to get a copy while it was still available.

‘Fury’ was a co-production of Games Workshop and Fantasy Flight, and so became a casualty when the two companies ended their relationship late last year. I don’t know what this means for future printings of the game, or even if that is still possible, but as of now the game can only be found for ever-rising prices through online resellers. If you are interested in getting the game, it might actually be best to bite the bullet and get a copy now before the price gets really spooky.

As for the game itself, it is up to four hunters playing together to trap and defeat Dracula, who is played by a fifth player. The board is a gorgeous, historic map of Europe, through which the hunters will take carriages and trains trying to find a lead on the Count, who lays all manner of fiendish traps and surprises for the hunters.

Dracula’s movement each turn is hidden, so the game begins as a tense game of cat and mouse, played against a ticking clock, as Dracula becomes more powerful, and spreads more influence across Europe. But once the hunters happen upon his trail, the tension explodes into a few climactic rounds as the hunters come together to try and defeat Dracula before he slips through their fingers again.

This is a finely-tuned, tense and engaging game that I have no hesitation recommending. It drew us under its spell from the start, and straight away left me wanting to play again.