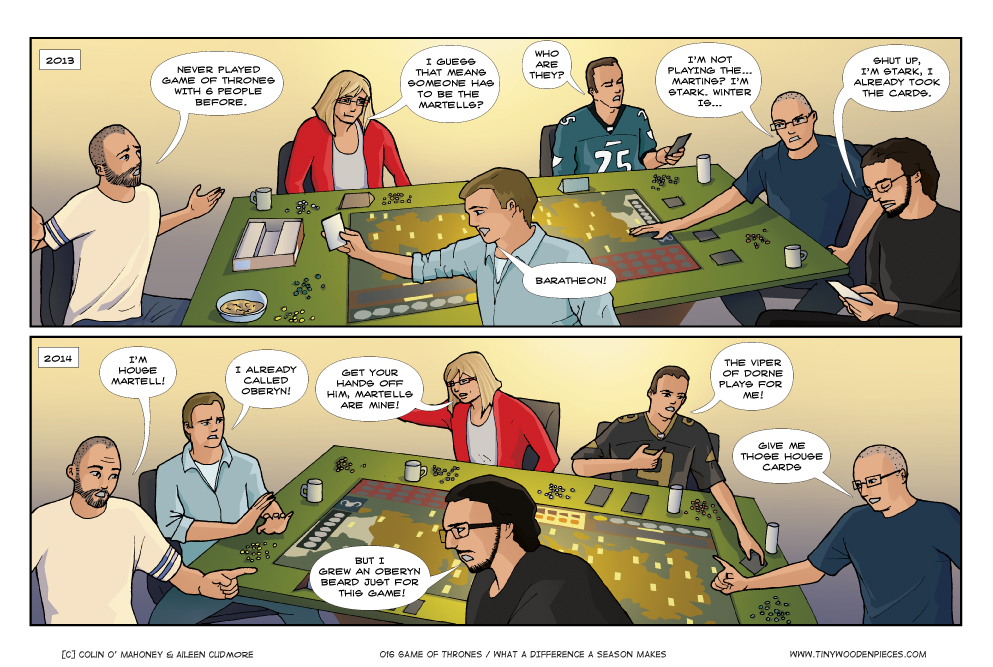 What a difference a season makes

If season four of Game of Thrones taught us anything, it’s that Tyrion doesn’t have the field to himself when it comes to Westeros’ Man of the Year awards (at least amongst fans, in Westeros itself, Geoffrey buys the accolade every year). From a House that hadn’t much mention, let alone screen time on the series to date, came one of the show’s more memorable characters. The Red Viper of Dorne single-handedly managed to spark interest in that Southern part of the Game of Thrones board game map. Of course, those who have read the novels will argue and counter this point, but as soon as anyone who has read ahead opens their mouth I stick my fingers in my ears to avoid spoilers, and so remain happily oblivious to their protestations.

Game of Thrones was our first “big” board game, a big investment, and as big an investment in time as it was in money. As such it took us a long time to get it to the table. The rulebook is a volume big enough to make George R.R. Martin blush, and it took a few reads and an initial playthrough to really get our heads around it. We loved it when we did, though, and really wish we could get it to the table more frequently – and earlier in the day, too. We have made the mistake of starting games late in the evening, something which I strongly suggest you don’t do if you value the comfort of a reasonable bed time. While there is next to no downtime, it does take a long time to play. Although I’ve heard tell of shorter play times, we have yet to clock in at under 3 hours, and more often than not go well beyond that.

Play-wise, it is, as I remember explaining to friends, like Risk, but more, and better. Simply pouring troops onto the map will not do. Not in the complex, dangerous, and hungry land of Westeros. If you want to field an army, you must have the supplies to feed them. If you want power, you must rally support amongst the people. If you want to survive you must know when to ally, and when to attack. If you want to stay in contention for victory, you must know when to spend your precious resources, and when to hoard them. If you want a game where every decision weighs heavily, and where you will never, ever have enough resources, troops, or time to do what you want, what you feel you need to do, then you have the right game. Game of Thrones manages to be as mechanically challenging as forging a Valeryian steel blade, while at the same time having as much theme as that admittedly awkward simile. The game simply drips with it – from play to components to artwork, it has Fantasy Flights usual high production qualities married with their commitment to thematic gameplay.

As we get deeper into this wonderful hobby of ours, we are coming to learn that Game of Thrones is not the most elegant of games, even for its weight category. Eclipse is a similar-sized behemoth, both in box and scope, but manages to play with a grace and speed that makes GoT seem a bastard offspring next to its princely charms. But that doesn’t mean we don’t love it just the same, even if it does sometimes keeps us awake late into the night.

So confession time: I’ve never actually played with six players in Game of Thrones. I’d love to try, to see how House Martell would fit into the whole thing and see how they impact the flow of the game. But, for me, it would also mean setting aside a whole day to play the game if I’m to have any hope of seeing it to the end.

You see, I have really poor stamina for such long games. Every time I’ve played so far, I’ve started off brightly enough, full of schemes to expand my territory and conquer strongholds. But come round six or seven, or whenever it starts to get really thinky, my brain just turns to fog. Strategy escapes me, tactics flee, plots dissipate. I find the whole thing exhausting, and the planning phase just kills me.

So I reckon, for me to fully enjoy Game of Thrones, I need to factor in regular breaks in the game. Schedule in time to eat, stretch, and get some fresh air and all that good stuff. And then, with everybody feeling a bit more refreshed, it should, hopefully, make for a fairer fight for the Iron Throne. Or at least as fair as anything can be in Westeros.