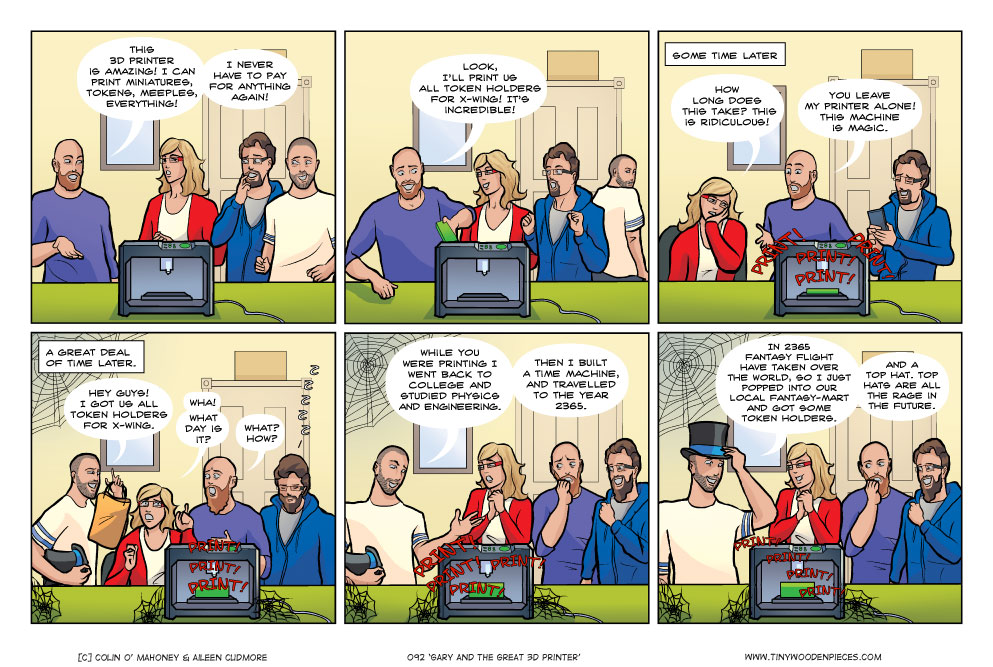 My No. 1 hope for the future is that top hats make a comeback.

So Gary actually found a template online and printed an X-Wing token holder. And, in fairness, it’s really great. It holds everything you need, and the quality is impressive. It’s well crafted, sturdy, and honestly the kind of accessory a sucker like me would pay good money for. But while I love the open source nature of 3D printing – the template for the token holder is freely available online – on a consumer level, the technology is not quite there yet. The token holder took five hours to print. That’s not to take away from 3D printing. The technology is literally revolutionary, and the possibilities are game changing in any number of fields. But a 3D printer in every house is still a few years away. Hopefully not too long, though. I could totally print an ace top hat.

In other news, details of Rob Daviau’s Seafall are beginning to emerge, and like a map slowly being unravelled, it paints a more and more fascinating picture of the game it will be. Seafall is the third ‘Legacy’ game that Daviau has produced, and it sounds like it could be the most exciting of them all. Which is saying something, given Pandemic Legacy sits on the no. 1 spot on Board Game Geek, a spot occupied exclusively by Twilight Struggle for as long as I have been playing board games.

We had intended to get Pandemic Legacy but after leaving it too late, we were unable to secure a copy at Christmas. Perhaps that’s just as well, given our Risk Legacy campaign has stalled indefinitely. That doesn’t mean we don’t intend on getting Pandemic Legacy. Pandemic remains one of our all time favourite games, so our only hesitancy is managing to play the whole campaign in a reasonable time. That’s best achieved when Aileen finishes college in September. The problem there is that Seafall is due out on August, and I may literally explode with excitement if I don’t get to play it straight away. Below are some excerpts taken from a recent article on Polygon:

“But where Risk: Legacy and Pandemic: Legacy were written to resemble summer action-thrillers in their pacing, Daviau said SeaFall more closely resembles the size and scale of the epic Lord of the Rings trilogy.

Bundled with each copy of the game will be the Captains’ Booke, a kind of choose your own adventure journal. Whenever players trigger certain in-game events — called Milestones — they’ll read large sections of this book that will move the game’s narrative forward … It has 430 entries”

Seafall seems to be a sprawling, swashbuckling, seafaring, adventure where players can choose to trade, explore or fight their way to victory. As you play, both a map and a narrative are teased out, and a world and it’s history are created. Based on what I have heard so far, there is pretty much nothing I don’t like about this game. But we found getting through Risk Legacy to be more or less similar to herding cats into a unicorn pen, so it’s likely going to be a choice between Pandemic or Seafall as a campaign game. That’s a tough decision I don’t want to have to make. And to top it all off, Pandemic Legacy Season Two is apparently already a work in progress…