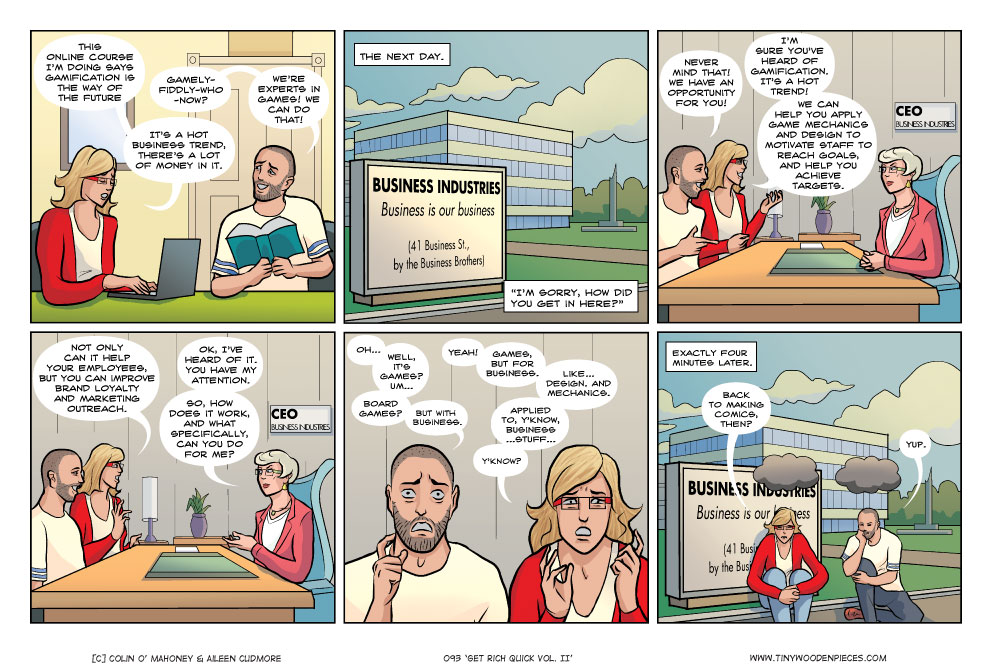 These days, whenever I open up a new document to start on a Tiny Wooden Pieces script, my first thought is always “Script number 093? – wow. That’s a lot of comics.” When we started, I never imagined we would get this far. I’m not sure how far I did think we would get, if I’m honest. Writing a comic a week, every single week, about board games, is not something I figured I’d be able to do this long. I mean, I love board games, and I love comics. I just didn’t think I’d be able to keep it going. People do actually ask me quite often how I come up with ideas every week, and the honest truth is I don’t like to think about it. If I think about it too much I think it’ll scare me. Or worse, scare the ideas off. So the creative process is, essentially, don’t think about it until I have to, and then hope really hard I don’t draw a blank when I do have to think about it (usually about Sunday when I’m thinking – oh sh*t next week is like, one day away).

And sure, some weeks are better than others, and some weeks are, well, probably just plain weak, but 93 comics later, here we are. Headed towards 100. And with a strong readership, who I look forward to talking to in the comments every week.

We had hoped to do something special for number 100, but Aileen has gone back to college, so our big plans are on the back burner until much later in the year. We plan to redevelop the site, and maybe even expand it a little bit as well. But we don’t want to bite off more than we can chew, so for now, we’ll happily munch on just one comic a week and some blog posting.

So: Gamification. I worked for many years in business management, and studied it as well. I saw a fair few nonsensical trends come and go; this week’s latest and greatest must-do for your business. I gave up my serious-face-suit-wearing alter ego before gamification became a hip business buzzword, though, so I am fairly uneducated in the matter. My gut feeling is that although it is overhyped and will be replaced with the next big-business-thing before it is meaningfully integrated into organisational strategy, that has more to do with modern management than gamification. Gamification itself seems fascinating, and I love the idea of game mechanics and ideas being usefully integrated in other areas. Part of the appeal of games is the immediate, tangible and positive feedback they offer. Completing a level, beating an opponent, overcoming a challenge mean real, measurable victories, albeit on a small level. And that is immensely rewarding. So obviously, it makes sense to take this system and leverage it in other areas. Education springs to mind. And that’s a system that could sure use serious change.

OK, those were just some stray thoughts that got away from me. What I meant to say was, I don’t know that much about the subject, but I am guessing a fair few of our readers do. Or at least, have an opinion, or some experience? I would love to hear about it.

Educate me! Inform me!