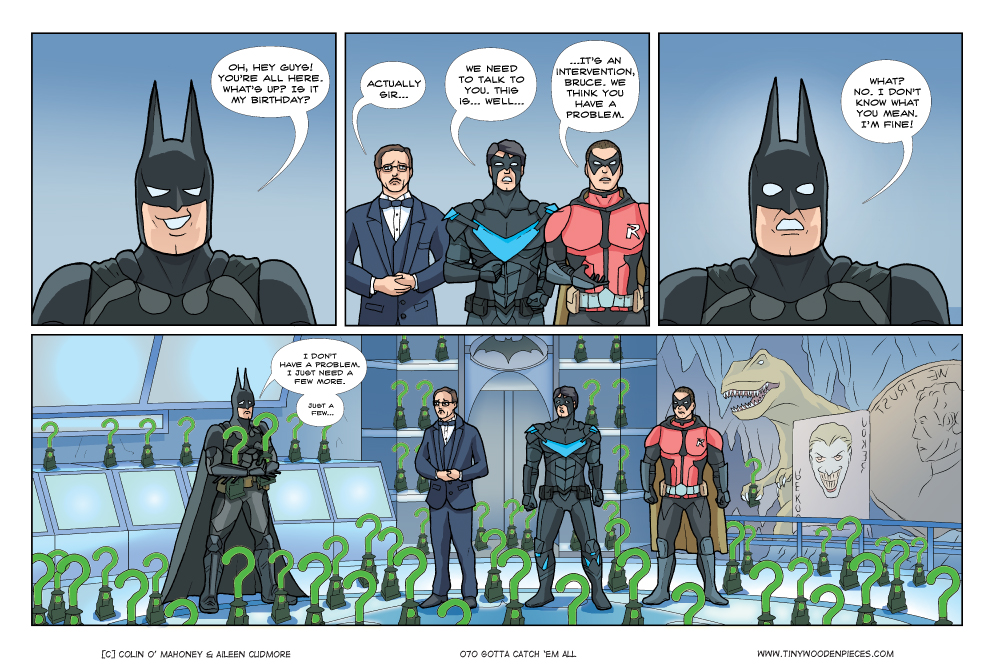 We’ve strayed off the strictly straight and narrow of the “webcomic about board games” tag line before, and suffered neither slings nor arrows from our lovely readers. I will take this as a sign that an occasional off-topic comic is not the worst faux pas we can make. Well, I say off-topic, but it’s still game, and who doesn’t love Batman? No-one, that’s who. Also maybe the Joker.

So: I went ahead and bought an Xbox One. With Star Wars Battlefront on the way the purchase was inevitable, but Arkham Knight certainly expedited the process.

It manages to not only expand the scope and environment of previous Arkham games, but, more importantly, it manages to simultaneously trim some of the fat as well. Progression in the story no longer feels like it’s a matter of acquiring gadget upon gadget in order to solve the next puzzle and open the next area. There is more to it than simply a utility belt strung with enough gimmicks to make Adam West blush. The gadgets are there, of course, and supplemented with the Batmobile now too, but they never feel like a focus, as important as they might sometimes be in progressing. The focus, and what drives the game, is the story. The brilliantly told story of the night that will end the Arkham series, and ultimately the achievement that defines the series.

Collecting all the ‘Riddler trophies’ in the game is a side quest, not strictly necessary, and not usually the kind of thing I go for in games. Generally, once the story is finished, I’m out. Past the point of the ending, I rarely find anything to engage me in a game. If I’m really enjoying a game, I will usually think that I’m going to end up doing all the side quests, maybe even getting some DLC to extend the experience. But after I finish the main story I immediately lose interest. Story is too important to me, and once it’s removed from the equation, everything else just seems hollow, too mechanical. Just going through the motions.

In Arkham Knight, though, the Riddler is too clever by half, and pre-empted my aversion to hollow busy-work. The game has a few different endings, and the most ‘complete’ ending is dependent on fully collecting all of the Riddler trophies and getting 100% completion in the game. So for now, he has me in his grasp, and I’m stuck in Gotham for a while longer, until I manage to complete all of his puzzles, or it just begins to feel like too much of a grind and I just give up, possibly without ever seeing any ending.

That’ll show him. I guess.

Next week’s comic has already been written, so I can promise it’s about board games. Meanwhile, slings and arrows can be aimed in the comments below, and if you’re the one person amongst our readers who in fact does not love Batman, feel free to vent your frustration and sing the praises of whichever hero does flutter your cape. I’d be happy to discuss it with you.

Except for the food-writing of Nigel Slater, how underrated ‘The Way of the Gun’ is, how great a whiskey Bushmills 16 yr old is, the novels of Magnus Mills, the brilliance of Leonard Cohen and cheese, there is nothing I like talking about more than Batman.