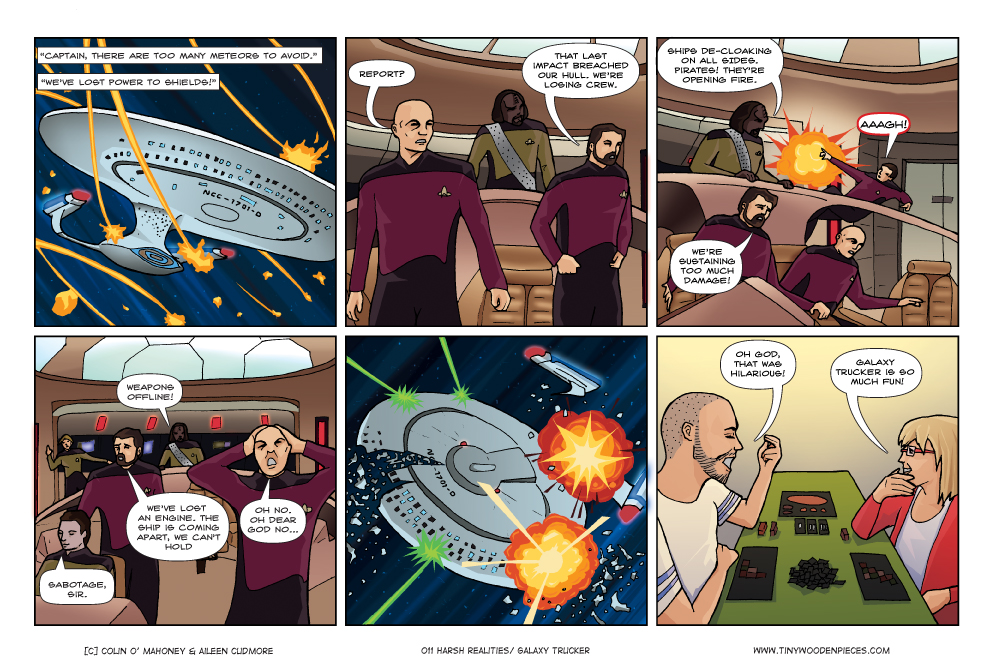 Galaxy Trucker is a favourite of ours. We’ve never failed to have a blast (sorry ships) playing it. It took a long time to find a comic to do about it though. As I mentioned a couple of weeks ago, sometimes strips are easy, jumping fully formed from the rulebook. The problem with Galaxy Trucker was that it is already a funny game. A very funny game. It is hilarious in design, theme, artwork, rules and gameplay.

Its space-faring, ship construction theme is grounded by the players working for ‘Corporation Incorporated’, an interplanetary supplier of sewer systems and low-income housing. Instead of building expensive ships to transport their cut-price cargo to the farthest reaches of the stars, the company hit upon the brilliant idea of simply making their ships from the cargo, and dismantling them upon arrival. Given the nature of the ships, of course, arrival is not guaranteed. And that’s the fun of the game.

It’s roughly divided into two parts, firstly a race to construct your ship, which is a blind grab of (hopefully) suitable components that will not only power, defend and supply your ship, but ideally stay attached on the journey there. This building phase is the real challenge of the game, with everyone pulling from the same pile of components to fill out the blueprint of their ship, hopefully equipping it well enough to survive the awful encounters the game gleefully throws your way.

These encounters form the second part of the game, where players race their ramshackle constructions, stopping along the way to pick up cargo, drop off crew, or just stopping because a meteor sheared your last engine off the side of your ship. The meteor you couldn’t blast out of your path, because in the blind panic to finish building your space-bound monstrosity, you put all your guns facing inwards and forgot to install the batteries to power the things in the first place. A criticism levelled at Galaxy Trucker is that there isn’t that much ‘game’ to this second half. This, in a sense, is fair. There aren’t that many decisions to be made at this stage. But that isn’t all there is to it, either. This is where you watch your work in the previous round pay off, or quite literally fall apart. It doesn’t take long, it’s nail-biting, and it is great to see the result and complete consequences of your engineering, be that good or bad. It’s almost a reward for the frantic first half, to be able to sit back and watch your hard work race across the galaxy.

That’s Galaxy Trucker, and that’s why we love it. It’s not going to scratch that deep strategy itch, but it doesn’t ever try to. It will test dexterity while under pressure, and decision making while under threat of crying with laughter. Whether disaster is befalling you, or you’re watching it happen to your friends as you sail past them, it is always entertaining.