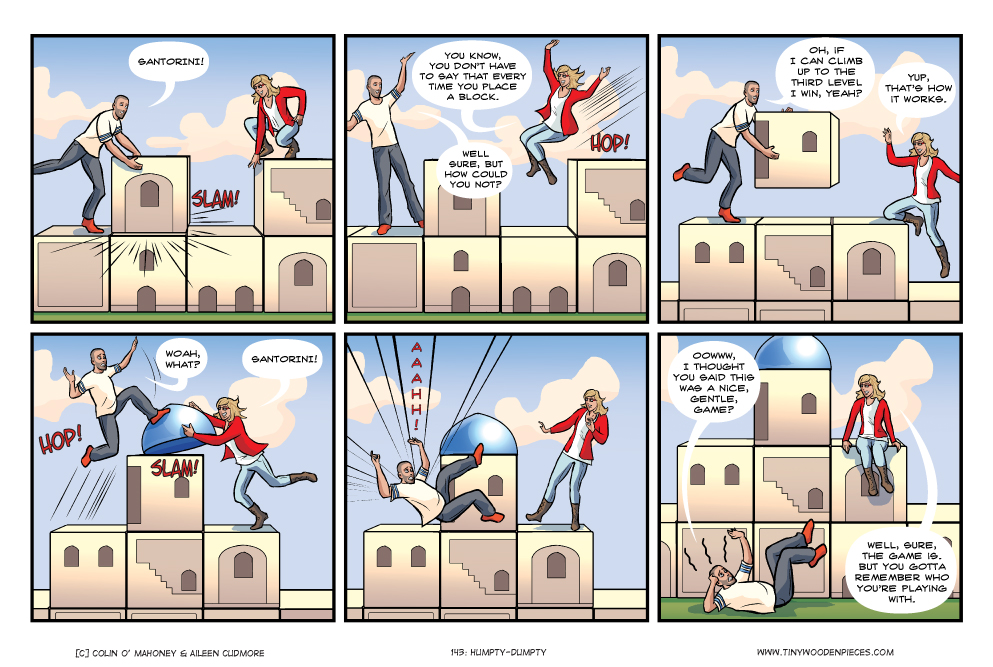 I have played only a handful of games of Santorini, and while I have enjoyed it, I don’t feel any great desire to play it anymore. Having said that, I have only played in the ‘base mode’ without any of the ‘god powers’ included in the game. That is probably equivalent to only playing the tutorial mode in a video game, so I will withhold judgement until I have played with the stabilisers off.

Abstract games have never really been my cup of tea anyway. If I were to list my three most important elements in any game, it would look a little like:

So obviously abstract games don’t exactly roll my dice, so to speak. If I had to play an abstract, my preference would be for a less complex game, like Santorini. A simple set of mechanics that provide a nice puzzle or challenge for the player.

If you start to complicate that equation and add more layers and mechanics, I can’t help but question why I am taking actions and moving pieces; not finding any satisfactory answers on the board means that I don’t have a compelling reason to continue to play. If I am just pushing cardboard around a vacuum in order to score more points, you have lost me. Hence, Santorini, and my absolute favourite abstract: Hive.

However good Santorini may turn out to be once the God Powers come into play, I very much doubt it will tower high enough to topple Hive from the top spot. Hive is a boardless, chess-like two-player game. Each player has a set of wonderfully chunky, tactile, hexagonal tiles, which they place to form the ‘hive’. Each hex represents a different insect: beetle, grasshopper, etc., each with a different movement rule, à la chess. You place pieces and slide them around the ever-expanding hive in order to trap your opponent’s queen.

It’s simpler than chess (considerably so), but still has enough depth of play to warrant more than one strategy guide available to purchase. While I have long since given up on chess (like any sane person would), Hive is a game that I feel I am capable of learning and improving with all the time, without ever feeling utterly and completely out of my depth.

But all of the depth of Hive comes from strategy, not mechanics. The rules form a very simple framework, and games only take 10-15 minutes (depending on how quickly I lose).

My initial feeling on Santorini was that the rules framework did not allow for much gameplay depth, and it was simply move and counter-move. But the god powers introduce different win conditions and player abilities, so these should hopefully shake things up enough spike my interest in the game again.