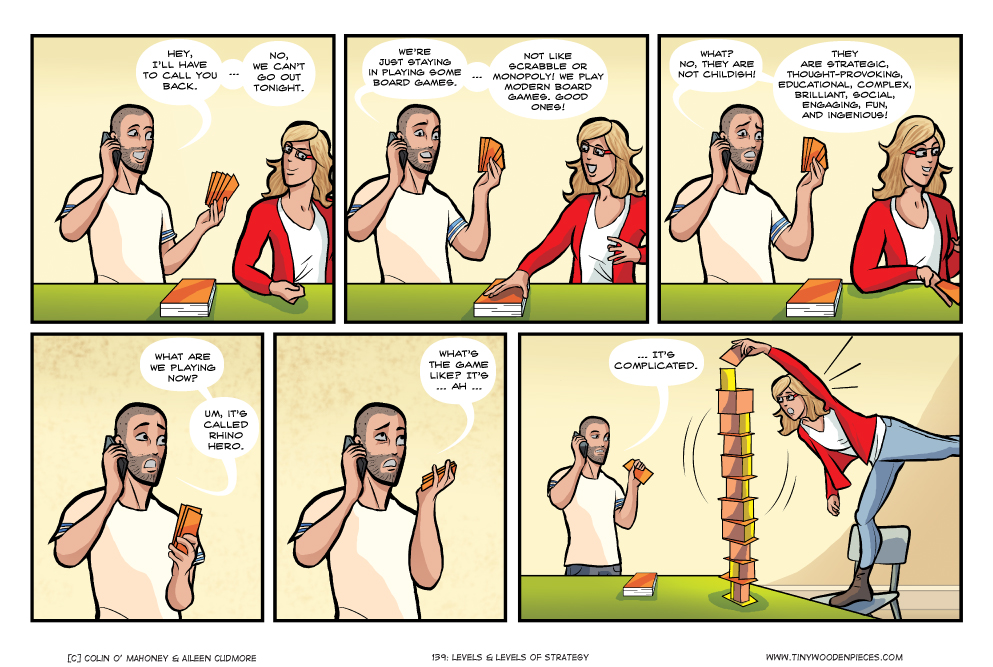 I had wanted to play Rhino Hero for a long, long time, and had built up really high expectations for it. Luckily, and unusually, it absolutely lived up to those expectations. This game is great.

Ostensibly, it is a kids’ game (ages 5+) so the premise is simple. Each player gets five cards, and the first player to get rid of all of their cards wins. You get rid of your cards by adding them to the ever-growing tower. You first lay down horizontally one or two folded cards to form ‘walls’, and then add a card from your hand as a ‘roof’ to the walls. This roof will have markings on it instructing the next player on how they must place the walls on their turn. And so the tower goes up, and up, and up.

Some cards instruct players to pick up an extra card, reverse the order of play, or most interesting of all, add the eponymous Rhino Hero to the tower. He takes the form of a solid wooden meeple. Exactly the kind you don’t want to have to balance precariously on a tower of cards that might be 10 layers high.

The first player to use up all of their cards wins, but more likely, and more often, the game ends when the tower collapses. In fact, in quite a lot of games, I have never actually seen anybody manage to place their fifth card. When the tower collapses, once you are done making fun of the person who collapsed it, you gather up the cards and play again. Because how could you not play again?

We have actually played quite a few great card games recently. I talked a few weeks ago about playing 7 Wonders for the first time, and now we can add 7 Wonders Duel to that too. Only one play so far, but I think this is a game I am going to like.

It functions almost exactly like regular 7 Wonders, but instead of passing your hand to the left and drafting one card at a time, now there are cards laid out on the table in ‘structures’. Effectively, these structures ensure that some cards are facedown, some are face-up, and some cards only become face-up (and available) after cards that may have been covering them have been picked. It’s a great replacement for the original mechanic, as it ensures you can always see a certain number of cards that will come available, but never all of them. In this way, it offers the same balance of strategy, but with having to adjust according to what becomes available – or not.

As it is one on one, there is more direct interaction with your opponent. The game offers two ways to win an immediate victory, so if you see your opponent attempting this, you have to start playing against them and taking cards that they would need to win. Thanks to this level of improved player interaction, I think I may end up preferring it in the long run to its older brother. Time will tell on that one, though.

On a final note, the nominations for the Golden Geeks have just been announced: you can find the list and all of the nomination categories here. It looks like a great selection, and we definitely agree with all of the games we have played being nominated. Sadly, that is a very small number of games this year, a fact which surprised me. Basically, we’ve played Fabled Fruit, Arkham Horror LCG, Kanagawa, and Scythe, but other than that the nominations are one big wishlist for us. Definitely something we will be looking to fix throughout the year, though. Perhaps Tabletop Cork can be of assistance to us in that regard?