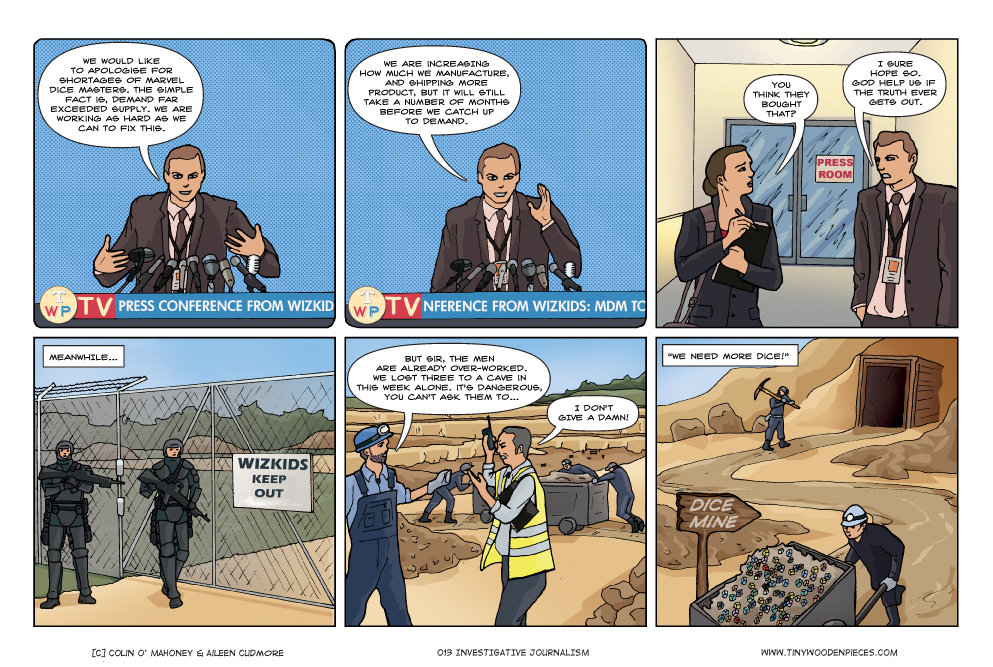 ‘The big retailers got all the copies’.

‘They are purposefully short-shipping to create demand’.

People love a conspiracy, or any kind of story. The simple fact is that Marvel Dice Masters is a product that meets at an almost unique crossroads of demand right now. Gaming is going through a boom, so there’s that.  It’s a collectible game, those are particularly big right now. As though that wasn’t enough, it’s based around Marvel superheroes. How big are they right now? Have you been to the cinema lately? And finally, just to ensure no-one escapses, the booster packs are a Dollar. Just one. One Dollar! Who’s not gonna walk into a games store and not pick up one booster. Or two, or three, or more. I mean, c’mon. They’re a Dollar.

Did Wizkids print enough to meet demand? Actually, they over-printed on what they perceived the demand to be, and despite shortages, sales for boosters have still hit 7 digit figures.

As I have mentioned here before, playing M:TG put me off collectible games. When spending more money than your opponent becomes an intrinsic part of playing the game, that is no longer a game I want to play. Of course you can play Magic casually, but that wasn’t the scene around my local game store. A few weeks ago I managed to get my hands on a Starter Pack for MDM and couldn’t resist. A game that meets at the cross-section of games and comics seems made for me, so I went for it. I have only had the opportunity to play a few games since (weekly webcomic, what were we thinking?) but I am loving it. It brings back the old thrill of deck-building. Spending time between games combining cards (dice, in this case) to form killer combinations and clever strategies. It’s that puzzle that Dominion provides, but one you can mull over in your own time, and then bring to the table and test, see where it falls down, and then tweak. And then tweak some more, and more.

However, what I quickly realised with MDM was that you get very little in the Starter set. You can play a few games, but it is lacking in variety of cards and dice. There is simply not enough in the core set to play even at the most casual level. But as mentioned, the boosters are cheap, and it’s not like they are hiding the fact that you need to buy more to get the most out of the game. It’s labelled as collectible.

What I don’t like about it is what you get in those boosters. Two dice and two cards for a dollar is great value (don’t yet know how that is going to convert in Euros) but the cards are tied to the dice. In a booster you get one dice for each card you get. If you have a Wolverine card, you need the die to go with it. But one isn’t going to cut it. From what I can gather from playing the starter, to make the most out of a card you will want its full complement of dice, which is four. Three minimum, to make it worthwhile putting in your deck. So providing only one dice with each card means that you will need to buy more boosters just to fill your complement of dice for that card. While two cards and two dice seems like good value, far better value within the actual framework of the game would be one card and two matching dice.