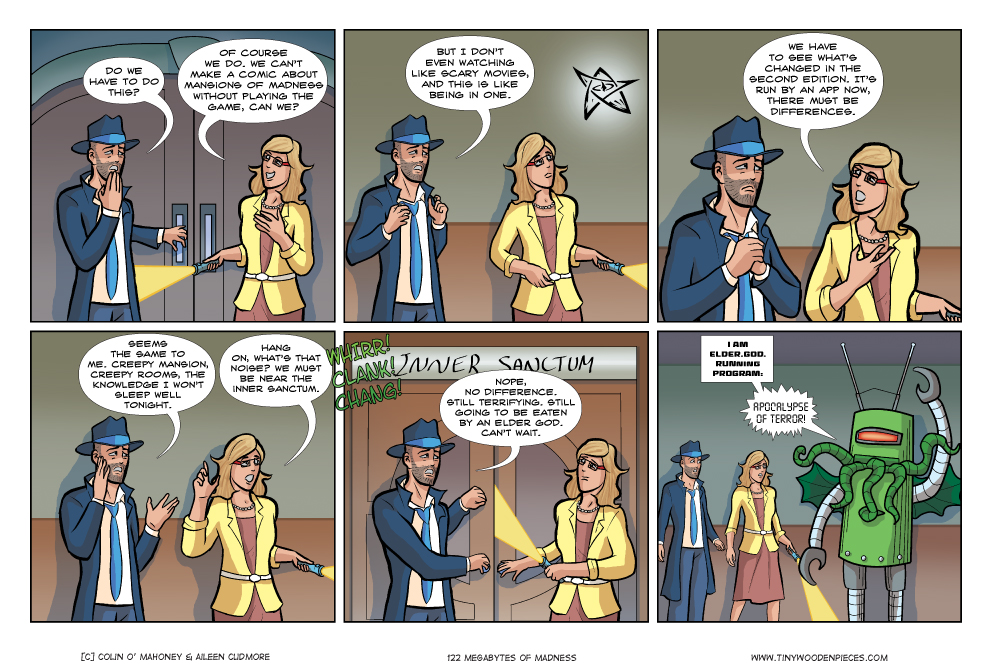 In actual fact, we did make a comic without having played the game. With a weekly schedule, and a limited budget, both time-wise and money-wise, this is often necessary. I would feel bad if we were reviewing a game on these terms, but as all we try to do is add some more humour to the hobby we all love, I feel it’s OK to poke some fun at games from a distance, particularly as we try to keep the comic topical.

I did read and watch a number of reviews on the new edition of Mansions of Madness, and oddly, I can’t seem to get a clear handle on whether or not the game improves on its first, original edition. It’s a game I have long wanted to play, so I was very curious about the new edition, and the changes made. Replacing the role of dungeon master with an app is actually a great idea for a game like this. Obviously, this could never be done with an actual RPG, but with the more limited scope of a board game, it is altogether more feasible. Fantasy Flight Games tried and succeeded in their first app-driven game, XCOM, which runs brilliantly, and fits thematically with being run by technology. Having an app to inject added chaos into a real-time game by timing events, interrupting players and throwing random spanners into the works is actually a brilliant conception.

Mansions of Madness doesn’t quite seem to work like this, though, and appears to simply replace the role of games master with an app in order to make the game fully co-operative. There don’t appear to be any integration issues (unless you count hyperbolic, unfounded, apocalyptic fear), and the game apparently runs smoothly. The issue seems to be with replayability, and the number of scenarios given with the game – which is a sparse four. There are add-ons and expansions, of course, but they seemed to be priced closer to full games rather than expansions. They are of course chock full of tiles, cards and miniatures, but that doesn’t really take the sting out of it for me.

Having said all of this, what I have written above is not a review, nor should it be regarded as such. This is not a game I have played, but while it is not really on my purchase list, it is still certainly a game I want to play. I enjoy Arkham Horror and Elder Sign, and Mansions Madness takes these games further, crafting a more immersive, spooky and mysterious play experience, all of which are steps in the right direction as far as I am concerned.

In the meantime, we have plenty of other games to fill the dark evenings in the run up to Halloween – Ghost Stories and Mysterium being top of the list in that regard.

Anyone played Mansions of Madness 2nd Edition? And more importantly, what are your recommendations for a good night of spooky gaming?